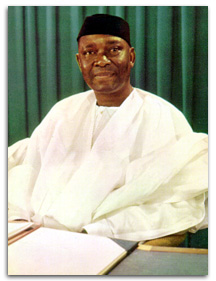 
Born in Zungeru in present day Niger State in 1904 to Igbo parents. Dr. Nnamdi Azikiwe spent much of his early life in Lagos. Determined to succeed, he later found his way to the United States of America.

He returned to Africa in 1934 armed with a masters' degree in Political Science and Anthropology from Lincoln and Pennsylvania Universities, as well as strong Pan-Africanist convictions.

He started off in the Gold Coast (now Ghana) as Editor-in-Chief of the African Morning Post in 1937, but was forced to shift base to Nigeria later that year where he founded the West African Pilot.

In the course of his political career which spanned about sixty years, he held many important positions. At Nigeria's attainment of independence on October 1, 1960 he became Nigeria's first indigenous Governor-General.

Three years later, in 1963, he became the first President and Commander-in-Chief, Armed Forces of the Federal Republic of Nigeria. He was removed from office by the first coup of January 15, 1966.

At the resumption of political activities in 1979, he became the leader and Presidential candidate of the Nigerian Peoples Party (NPP) in 1979 and 1983. Dr. Nnamdi Azikiwe held the traditional title of Owelie of Onitsha.