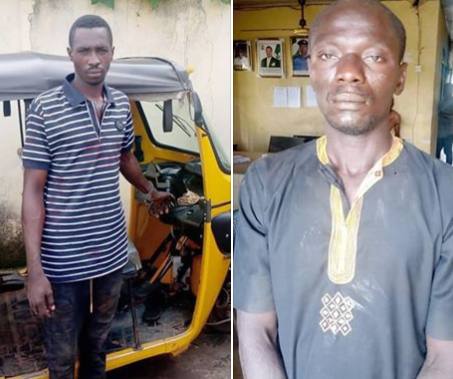 A statement released by the state police command today says the suspects namely Ikenna Ibemesi of Ogbunike town and Chikwudi Offorbuike of Nkwere Ogidi, who specialize in snatching tricycles popularly called Keke, were arrested by Police patrol team attached to the Oba Division in Idemili South LGA of Anambra State today May 26.

The suspects allegedly attacked their victim, Joseph Asogwa of No.31 Iro-Okoye Street Obosi, poured a peppery substance on his face and snatched his tricycle with Reg. No NKK 744 QY. The victim quickly raised alarm which attracted the attention of the police patrol team who quickly responded and arrested the suspects. The snatched tricycle was also recovered in their possession and registered as exhibit.

Police say the suspects will soon be arraigned in court