Nigeria is often described as a country of unity in diversity. This description probably stems from ttie fact that the country is made up of over 400 linguistic groups, three principal religions, a multiple of socio-political opinions and organisations and varying weaiher and climatic condi- tions between ihe North and the South.

Most of the festivals held in these areas, such as the Durbar in Katsina and Kaduna States, are associated with religious celebra- tions. The Argungu Fishing Festival in Kebbi State which has over the years acquired international recognition, is however removed from traditional religious celebrations.

The Northern States of Nigeria, especially Sokoto, Kebbi, Jigawa, Kano, Yobe, Borno, Katsina and Kaduna are semi-desert and so experience little rain within the year. The weather is generally hot during the day and cold during the night through most of the year. The common dress in these States is the Babanriga, a large, flowing top over large trousers. The dominant dress colour is white.

The major means of transport, from time, and as in case in other semi desert and desert areas 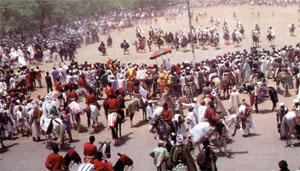 are the camel, the donkey and the horse. The horse, most of the times, is bred for the purpose of traditional and religious festivals such as the Durbar when they are dressed in very flamboyant colours and attires as active participants. In these Northern States, education, the judicial system and other institutions are influenced by the muslim religion. They practice the sharia (taken from the Koran) system of justice, education begins with learning Arabic and reading the Koran.

Western education has however gained much ground here with the establishment of the Ahmadu Bello university, Zaria, Kaduna State in 1962.

Technology, Bauchi. In what is described as the Middle Belt in Nigeria are the States of Niger, Kogi, Benue, Adamawa, Taraba and Plateau.

Plateau State and its capital of Jos remain the tourist capital of the whole of Northern Nigeria. The State boasts of a temperate weather, a number of rising, picturesque Plateau and a near-rural population that boasts of the largest concentration of foreigners among the States of the North. Add to this list the quiet environment of the University of Jos, the Highbrow National Institute for Policy and Strategic Studies, NIPSS, Kuru and the National Museum that depicts the cultures and traditions of several Nigerian nationalities.

The West is equally highly educated and industrialised. Nigeria's Premier University, the University of lbadan, Oyo State was established in 1948. There are also the Universities of Lagos and Benin (Edo State), the Obafemi Awolowo University (Ile-ife, Osun Sate) the Lagos State University and the Edo State University in Ekpoma. The area also boasts of the highest number of other educational institutions.

Their traditional institutions are highly reverred with all traditional activities revolving around the Obas of lfe, Benin and Lagos, the Alafin of Oyo, the Olubadan of lbadan, the Ataoja of Osogbo among others. Being highly educated, most of the citizens are paid civil servants or are involved in private business. There is not much of rural life as in parts of the North but the people still sustain and guard their traditional institutions, exploring their commercial potentials on the international scene.

The Yorubas, who are very colourful and extravagant in their dressing, are symbolised by the buba and sokoto that closely resemble the Northern Babanriga. Notable festivals include chieftaincy installations, the Osun festival (Osogbo, Osun State) the Eyo masquerade (Lagos State) beside others.

In the East and South Eastern States of Nigeria, Christians make up over 96 per cent of the entire popula- tions. These states, together, have the largest concentration of churches, which range from the orthodox to the pentecostal, in the country.

The States located in this region are Abia, Anambra, Akwa lbom. Cross River, Delta, Enugu, Imo and Rivers. In the four states of Abia, Anambra, Enugu and Imo, the primary language of communication is lgbo. In Akwa- lbom State, the major languages are Ibibio and Anang. In Rivers State the major languages are ljaw, Kalabari, lkwerre, lgbani, Kirike and Ogoni. In Cross River State the main language is Efik while in Delta State the main languages include lgbo, Itsekiri, Urhobo and Kwale.

In as much as languages vary in this area, cultural and traditional norms and dress modes arc very similar. Traditionally, the eastern and south-eastern women dress in simple, double wrappers, a blouse and a head tie to match. The men traditionally dress in flowing wrappers or trousers under a flowing, large shirt with cap to match. 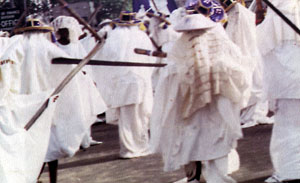 In Anambra and Enugu States, there are the Manwu festival; in Abia State there are the Ekpe festival, the Ekpe masquerade and the In ji (New yam) festival. In Akwa lbom and Cross River States, there are the Ekpo, the Kpe masquerades and cults. In Rivers State, there are the Nwaotam and Ekine masquerades and cults. The traditional institution of the Eastern and South Eastern States suffered a great deal as a result of the European intervention. Today, however, the traditional institution is re-emerging from colonial mentality. Eze have re-emerged in lgboland with pomp and pageantry, giving room for new yearly traditional celebrations of Ezeship (Kingship), Amanynabos today still rule Kalahari, ljaw, Okrika and Opobo kingdoms of Rivers State providing avenues for cultural activities all year round.

In Cross River and Akwa lbom States, the Obongs still evoke the cultural richness of the indigenous people. Most importantly, the Eastern and South Eastern States especially Rivers, Delta and Abia States, provide the entire nation with over 90 per cent of national revenue. This is because the area is rich in oil which has attracted a lot of investment from within and outside the country.