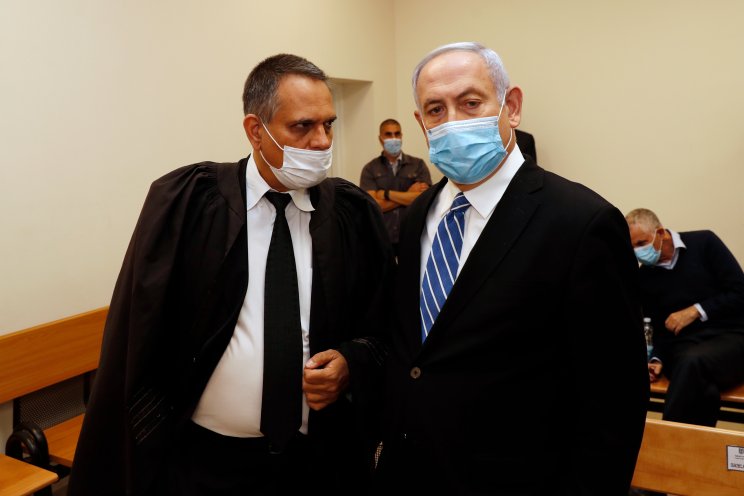 At the end of the session on Sunday, deputy state attorney Liat Ben Ari said she does not have an issue with the defendants not being present at the next session on preliminary requests.

Judge Rivka Friedman-Feldman said the court will notify the sides regarding the date of the next hearing.

Before the hearing, Netanyahu launched a tirade against the nation’s justice system, accusing police and prosecutors of conspiring to “depose” him.

Netanyahu’s comments opened what is sure to be a tumultuous period for Israel as he becomes the country’s first sitting prime minister ever to go on trial.

Hundreds of protesters calling him the “crime minister” demonstrated outside his official residence, while hundreds of supporters, including leading members of his Likud party, rallied in support of him at the courthouse.

Netanyahu faces charges of fraud, breach of trust and accepting bribes in a series of corruption cases stemming from ties to wealthy friends.

He is accused of accepting lavish gifts and offering to grant favours to powerful media moguls in exchange for favourable coverage of him and his family.

He denies the charges, which come after years of scandals swirling around the family.

Netanyahu entered the Jerusalem courtroom wearing a blue surgical mask, in line with public health restriction due to the coronavirus pandemic. He stood and talked to his lawyer and attorneys for other defendants, refusing to sit until TV cameras left the room.

As the proceedings began, the lawyers and judges also wore masks, with the three-judge panel sitting behind a glass divider.

In a hint of what could lie ahead, his lawyers said they would need two to three months to respond to the arraignment, and said they needed additional funds to add to their defense’s legal team.

Critics have said that Netanyahu’s arguments have undermined Israel’s court system and risk deeper damage to the country’s democratic institutions.

Netanyahu’s fitness for office was the key issue in three inconclusive elections over the past year. After vowing never to sit with an indicted prime minister, Netanyahu’s challenger, Benny Gantz, agreed in March to form a power-sharing coalition with his rival.

In a tweet, Gantz said he was sure Netanyahu will receive a fair trial.

“I repeat and emphasize that my colleagues and I have full faith in the justice system and law enforcement,” he said.

Netanyahu was forced to attend Sunday’s hearing at the Jerusalem district court, after his request to have his lawyers represent him instead was rejected.

The 70-year-old is used to setting precedents: he is the first Israeli prime minister born after the foundation of the state in 1948 and the longest-serving in its history.

But the impending trial is a deeply-unwanted first.

In 2009, prime minister Ehud Olmert stepped down after police recommended he be indicted for graft.

He was later tried and convicted of taking bribes and sentenced to 27 months in prison, but was paroled after less than a year and a half.

Like Netanyahu, Olmert came from the right-wing Likud party, although he subsequently defected to the centrist Kadima.

Netanyahu is fighting tooth and nail to avoid Olmert’s fate.

Among the charges he faces is that he sought to illegally trade favours in exchange for positive coverage for himself in Yediot Aharonot, Israel’s top-selling newspaper.

He is also accused of accepting cigars, champagne and jewellery worth 700,000 shekels (180,000 euros) from wealthy personalities in exchange for favours.

Perhaps most serious of all is the claim that Netanyahu offered media mogul Shaul Elovitch regulatory changes worth millions of dollars to his telecom giant Bezeq in exchange for favourable reporting on the Walla! news website.

That charge is also the most complex, said Amir Fuchs, a researcher at the Israel Democracy Institute, who says it differs from “classic” bribery cases where money changes hands.

In this case, Fuchs argued, the allegation is that Netanyahu “is getting only media coverage,” rather than cash.

“It is unprecedented,” he told reporters.

Netanyahu denies all the accusations and claims he is the victim of a witch hunt by the media and legal officials.

After months of suspense and repeated police questioning of Netanyahu, Attorney General Avichai Mandelblit in January filed charges against the premier.

Many commentators considered this the premier’s political death warrant.