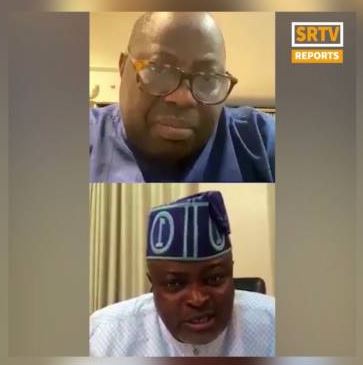 Mudashiru Obasa, Speaker of the Lagos State House of Assembly, reacted to allegations of gross corruption against him by saying “money is for spending”.

Obasa made the remarks in an Instagram Live interview with Dele Momodu, Publisher of Ovation Magazine.

SaharaReporters had in recent weeks exposed embezzlement and financial misappropriation carried out by the Speaker and some of his allies at the Lagos Assembly.

Obasa while responding to questions from Momodu said, “Money is for spending. I was Chairman, House Committee on Rural, and thank God Dr Kasali who was the comissioner is still alive.

“I became the Chairman, House Committee on PHC, and we still have 57 local governments and most of the chairmen then are still arround. We have Akabueze who was the Comissioner for Economic Planning is still so much alive.

“Fashola who was governor, Ambode and the rest. Call any of them, any of those people I just mentioned cannot link anything to me that Obasa when he was a comissioner he has done this, he has done that, no. I am saying it openly so people can hear, these people are alive so probably they are watching.

“Among the allegations they have raised, they didn’t say Obasa stole money, they said he spent money.

“What is the purpose of money? Is it not to spend? But the question, how did you spend this money? Do you have budgetary provison for the money you are spending? Yes.

“Training, seminar are they not part of budget? Festival and all sorts under which you have parties. They alleged we used N258 to print invitation card, is that possible? I don’t even think Dangote will ever do such a stupid thing when the total budget for the programme was N61m.”