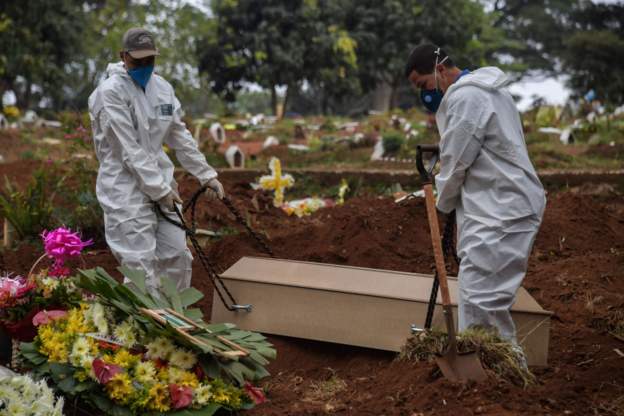 Brazil has become the sixth country to record more than 20,000 coronavirus deaths – reporting nearly 1,200 in the past day, a record high.

Experts have warned that Brazil is still a few weeks away from reaching the peak of the outbreak, and that insufficient testing means the official figures don’t show the true picture.

According to BBC, President Jair Bolsonaro has repeatedly played down the risks of Covid-19. He has urged state governors to lift lockdowns and promoted the benefits of the unproven anti-malaria drug hydroxychloroquine as a remedy.

With more than 20,000 dead, the nation now has the sixth highest number of deaths in the world from the pandemic.

And with outbreaks in Mexico, Chile and Peru, there are now fears that the region could become the next epicentre of the pandemic.

The virus was first identified in Brazil on 26 February and has since spread to every country in the region.

Its two most populous nations – Mexico and Brazil – have seen the highest number of deaths, but researchers say even this could be significantly under reported.