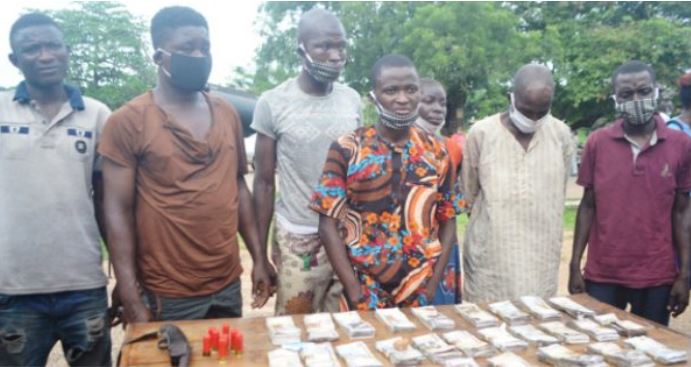 Suspected kidnappers of Akewugbagold twins, during their parade at the Oyo State Police Command in Ibadan yesterday

An Ibadan-based herbalist, Mutiu Rafiu, on Monday narrated to the Oyo State Police Command how he lied to his wife, Medinat, that the twins of an Islamic cleric in Ibadan, Alhaji Taofeek Azeez, popularly called Akeugbagold, whom he and six other suspects had kidnapped and he had brought home, were children of his friends, Daily Trust reports.

Rafiu said he told Medinat that the friend and his wife recently separated and were yet to decide who between them would take custody of the children.

The suspect, who confessed during a press conference in Ibadan, on Monday to conspiring with some other persons to kidnap the twins, pleaded that his wife be exonerated from the crime, saying she was innocent.

Akeugbagold, who is the immediate past Chairman of the Oyo State Pilgrims Welfare Board (Muslim Wing), had announced the abduction of his twins, a boy and a girl aged 28 months, via his Facebook page on Sunday April 26, 2020.

A video of the twins’ mother crying that she suffered delayed childbirth for 12 years before she got pregnant with the twins and begging the kidnappers to release them, had also gone viral.

Also paraded as one of the suspected kidnappers was Opeyemi Oyeleye, who had been a personal aide to the father of the kidnapped twins.

Opeleye, who the police described as the mastermind of the crime, said he was not part of the abduction process at the initial stage but could not avert it when his fellow suspects later told him about it.

He further said he thought he could mediate between the kidnappers and the parents of the twins but couldn’t do so before the police arrested him as part of the syndicate.

The Commissioner of Police in the state, Shina Olukolu, who paraded the suspects at the Command’s headquarters in Ibadan, said the police arrested the suspects with substantial parts of the ransom collected from the twins’ parents, and recovered the gun allegedly used for the operation, two operational vehicles and one motorcycle from them.

He said the suspects attacked Mrs Akeugbagold before abducting the twins.

“The criminal assailants demanded for a ransom of N50 million before the two abducted babies would be released.

“As soon as the incident was reported at the Ojoo police station and was later transferred to the AKS Eleyele/SARS office Dugbe, Ibadan, a team of AKS/SARS operatives swung into action and concerted efforts were intensified to rescue the abducted babies and arrest the perpetrators of the heinous crime.

“The twins were released unhurt eight days later after their father had parted with an alleged sum of N4m as ransom to the hoodlums.

“Consequent upon this, the investigating team embarked on painstaking investigation and traversed several states, including Adamawa and Sokoto, and in the process arrested Rilwan Taiwo, Rafiu Mutiu, Olumide Ajala, Fatai Akanji, Bashiru Mohammed, Opeyemi Oyeleye and Rafiu Modinat, the only female member of the gang detailed to take care of the babies in captivity, in connection with the crime.

“Exhibits found on them are one locally made single barrel gun, eight cartridges, two Micra cars, an unregistered TVS motorcycle and a cash sum of N2,863,000,” the police Commissioner said.