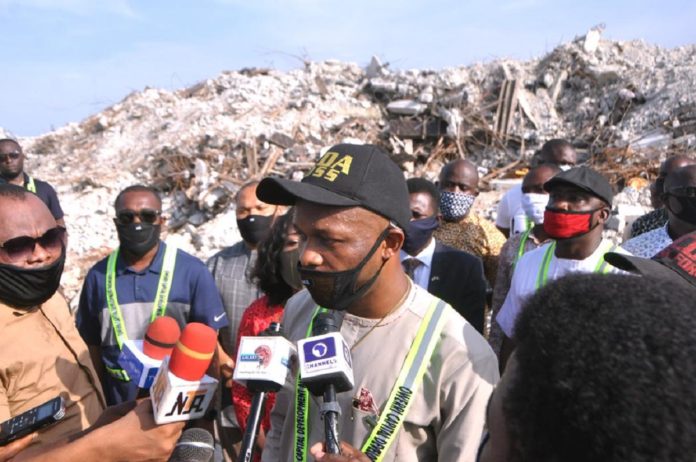 Six of the 12 survivours rescued from the eight-story building that collapsed last month at Yar’Adua Drive, New Owerri in Imo State by the state government have been discharged from the hospital.

The discharge has also coincided with the completion of the evacuation at the site by officials of the Owerri Capital Development Authority (OCDA).

The General Manager of the OCDA, Hon. Innocent Ikpamezie told newsmen on Wednesday that his office has completed the evacuation, which started on Thursday, April 30.

Ikpamezie noted that the prompt response from government was instrumental to his crew being able to rescue 12 persons. He said six out of them have been discharged from the hospital with all expenses paid by the Government.

However, he regretted that four dead bodies were evacuated from the site of the collapsed building.

While expressing his appreciation to the Governor, Senator Hope Uzodimma for providing them with all the necessary support, the OCDA boss stated that lives were saved as a result of the timely intervention from government.

Ikpamezie assured that a repeat of such incidence will not occur again in the State, noting that Governor Uzodimma has put machinery in motion to forestall such occurrence in the future.

Speaking on behalf of the six survivors discharged from the hospital, Mr. Odinaka Eliasim thanked the Governor for being a father who hears the cries of his children. He stated that government made sure they got the best treatment and lacked nothing while in the hospital.

Mr. Eliasim, who hails from Amiri in Oru East Local Government Area solicited the assistance of government in providing jobs for them. This, he said will help them overcome their present travails.