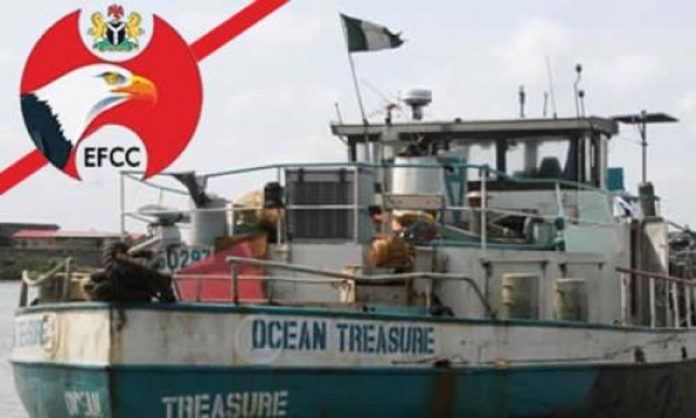 Justice Philomena Ekpe of the Court of Appeal, Calabar division, Cross Rivers State,  on Tuesday, May 19, 2020  set aside the decision of a Federal High Court sitting in Uyo, Akwa Ibom State, which acquitted Edward Odey Oluohu, Frank Asuquo Okon,  Godwin Etim Anwanadung and their companies, Blue Dolphin Limited and Lib-Zone Petroleum Limited, in a case of alleged oil bunkering brought before it by the Uyo Zonal office of the Economic and Financial Crimes Commission, EFCC.

The  EFCC  on May 22, 2018 arraigned  Oluohu alongside Okon,  Anwanadung and their companies, Blue Dolphin Limited and Lib-Zone Petroleum Limited before Justice F. O. Riman of the Federal High Court, Uyo, on a 6-count charge bordering on conspiracy and illegal dealing in petroleum products.

When arraigned, the accused persons pleaded not guilty to the charges  preferred against them , setting the stage for their trial which commenced on June 22, 2018.

In the course of trial, the prosecution, through its counsel, Nwandu Ukoha  presented three witnesses and tendered 14 exhibits which were all admitted in evidence.  The defence counsel,  Ime Umana  moved  a ‘No Case Submission’  arguing  that the evidence against his clients were not sufficient to justify the continuation of trial and  urged the court to discharge and acquit them.

Dissatisfied with the ruling, the EFCC filed a Notice of Appeal on November 3, 2018 and prayed the court to set aside the acquittal of the accused persons.  Delivering judgment on Monday May 18, 2020, at the Court of Appeal, Justice  Ekpe on behalf of Justice M. L. Shuaibu, upheld the appeal filed by the EFCC  and ordered  a fresh trial.  “This appeal is meritorious and hereby allowed”,  she  ruled.

The Judge  thereafter ordered the Honourable Chief Judge of the Federal High Court to reassign the matter to another Judge for retrial.