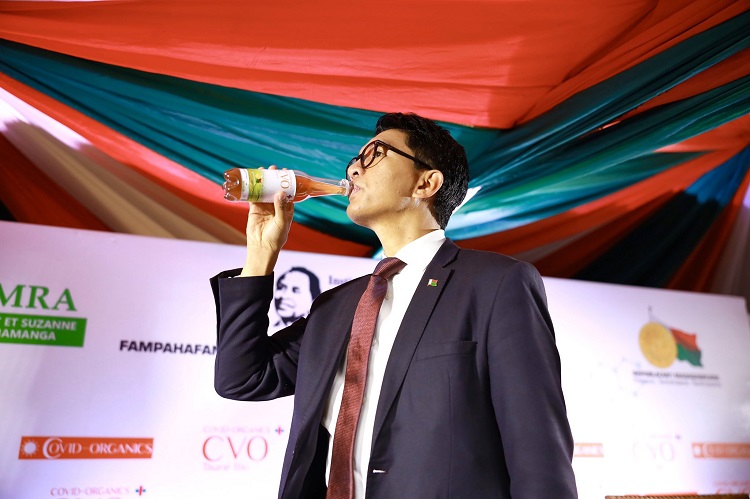 President of Madagascar with the COVID-Organics

The news of President Muhammadu Buhari ordering the presidential task force on COVID-19 to go for Madagascar’s herbal drug known as ‘COVID-Organics’ has come as a shock to many Nigerians, especially the proponents and practitioners of herbal and alternative medicines.

This so because in the last couple of months since the outbreak of the novel COVID-19 pandemic, alternative medicine practitioners and even learned professors have notified the government of their alleged cure to the disease that taken hundreds of thousands of lives worldwide.

Instead of listening to them and given a thought to their claims, the government totally ignored them and has afterwards, proceeded to order a herbal remedy from Madagascar that has been touted to cure Coronavirus, even though without clear-cut evidence.

This, I must say does not tell well of a government that is interested in rapid innovation and supports local industries, even though it claims to do so.

Madagascar has been getting a lot of attention since its President, Malgache Andry Rajoelina announced it had developed a herbal remedy to prevent and cure the deadly Coronavirus. ‘COVID-Organics’ also known as CVO was developed by DR. Congo-born medical doctor, Jerome Munyangi. The drink said to be derived from artemisia – a plant with proven anti-malarial properties – and other indigenous herbs has been touted to have cured some people in the country who were COVID-19 positive.

As we speak, the Nigerian government has already initiated plans to airlift the product from Madagascar after allocations have already been made available to some African countries including Tanzania, Guinea-Bissau, Niger and Equatorial Guinea.

It’s a pity how the government never encouraged, supported or invested in the local development of drugs that could have helped get us out of the current crisis the world is facing. I can remember correctly when Dr Maurice Iwu, a professor of Pharmacognosy from the University of Nigeria Nsukka (UNN) and Chief Executive Officer (CEO) of Bioresources Development Group (BDG) announced his claim to a Coronavirus virus cure. Iwu, a former Chairman of the Independent National Electoral Commission (INEC) added that the United States of America was also conducting a clinical test on his invention.

Another learned academic, Professor Maduike Ezeibe, a Professor of Virology at Michael Okpara University of Agriculture, Umudike (MOUAU) in Abia State announced his cure. So did Dr Paul Olisa Ojeih, Managing Director of Iris Medical Foundation Drugs and Pharmaceutical. Ojeih claimed his foundation had developed a drug known as VENEDI Elixir that would cure a patient in 72hours.

The renowned Ooni of Ife Kingdom, Oba Enitan Adeyeye Ogunwusi (Ojaja II) was not left out. The traditional ruler claimed that the herbal remedy has been tested on chronic Coronavirus patients who have achieved 100 per cent recovery and can testify to the efficacy of the herbs.

A female herbalist in Anambra State, one Mrs Flora Ilonze who owns the Centre for Psychic and Healing Administration in Awka challenged the government to authenticate the efficacy of her plants.

So were many others who claimed to have cures to the Coronavirus.

Understandably, the government can not begin to give undue attention to every Tom, Dick and Harry who claim to have a cure to the virus, but it would have been indeed proper to give a listening ear to those of them whose academic background is sound and who are prominent people in the society with impeccable integrity.

The government could have done so by setting up a committee that would listen and examine the claims. There is no harm in testing the efficacy of their claims.

This is what would have been expected from a government This government has since its inception carried out a crusade that encourages the manufacture and patronage of Nigeria-made products, but it has rarely walked the talk. A perfect example would be the Legislature’s neglect of locally-made Innoson Motors for Japanese-made Toyota.

A severe case of hypocrisy on the part of the government, you would admit. There are claims that the government may be raking in millions from aids from foreign countries and international organisations, so long as the threat of the virus is kept alive.

“They don’t want to listen because this COVID-19 pandemic is a money-making venture, they are putting fears in Nigerians keeping them at home and milking our economy dry,” Dr Ojeih had claimed in an interview.

Worldwide, alternative medicine has gained more prominence than ever before with countries like China and India taking the lead. The Nigerian government cannot continue to relegate it to the background and dismiss its practitioners and then embrace a product from tiny Madagascar when the development of the same product was right before our eyes here at home.

In conclusion, for the good of Africa, we hope that the Madagascar miracle cure certainly works and heals the continent, and maybe the rest of the world from this pandemic that has threatened the globe, infecting over four million and killing close to three hundred thousand people.

And to Madagascar, thank you for taking the initiative, instead of relying on the Western world to develop vaccines for Africans to use.