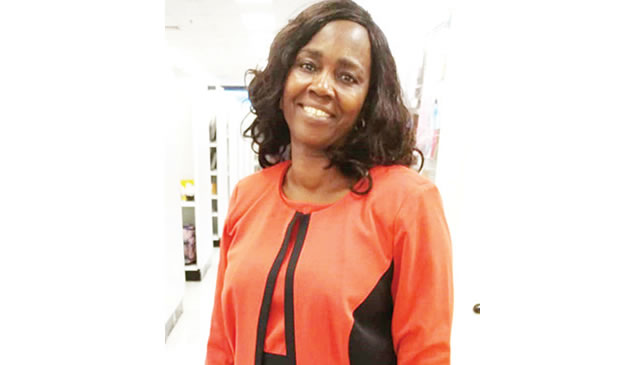 A driver with the Bus Rapid Transit, Collins Nnodi, has gone into hiding after crushing a businesswoman, Mrs Grace Okeleke, to death at the Agric bus stop in the Ikorodu area of Lagos State.

PUNCH Metro gathered that Grace, the wife of the Head of Public Relations, Globacom, Andrew Okeleke, attempted to cross the road after being dropped off by her driver around 7.20pm, when Nnodi, who was driving a bus with number plate EPE 59 XR, knocked her down.

It was learnt that the businesswoman died on the spot.

However, Nnodi was said to have zoomed off and abandoned the victim at the scene of the accident.

Annoyed by the development, it was gathered that an angry mob vandalised some BRT buses plying the route.

Explaining the circumstances surrounding the incident, the family said in a statement that until her death, Grace was a minister at the Redeemed Christian Church of God, adding that the businesswoman was survived by her husband and children.

The statement read in part, “The death has been announced of Mrs Grace Okeleke, wife of the Head, Public Relations, Globacom, Mr Andrew Okeleke.

“Mrs Okeleke died in a motor accident on the Lagos Road, Ikorodu, on Monday evening. She was hit by a Lagos BRT bus with number plate EPE 59 XR.

“The deceased was crossing the road after being dropped off by her driver just after the Agric bus stop, inwards Ketu, where there was no pedestrian bridge, when she was hit by the BRT bus. She died on the spot before she could be taken to hospital.

“The late Mrs Okeleke, a businesswoman, hailed from Issele-Mkpitime, Aniocha North Local Government Area of Delta State. She was until her demise a top leader of her town’s women group in Lagos as well as a minister of the Redeemed Christian Church of God, Grace Hall Parish, Ikorodu.

“Mrs Okeleke is survived by her husband and children. Burial arrangements will be announced later by her family.”

When contacted, the Chief Security Officer, Primero Transport Services Limited, the franchise holder of the BRT buses, Cletus Okodolor, while commiserating with the family, condemned Nnodi for abandoning Grace at the scene of the accident.

Okodolor said, “We sympathise with the family and we are shocked at the action of the busman. The accident involved one of our buses, with number 344. The bus was coming from Ikorodu inwards Mile 12, and she was trying to cross to the other side of the road without actually looking properly; she entered the BRT corridor to cross and there was contact.

“The woman died on the spot. But the busman did not help matters, because he drove off out of fear of being hurt and refused to put us in the picture. Suddenly, we started getting calls that an angry mob was vandalising our vehicles, because one of our buses knocked someone down on the corridor and we quickly informed the Traffic Division of the Owutu Police Station and its personnel were dispatched in the area.

“When we got there, we learnt that the husband had taken the corpse to the morgue. But during our investigation, we realised that the busman had parked his bus in front of our office and left the engine running, instead of parking it at the right place.

“So, we started searching for the busman, but he was nowhere to be found and that was how we realised that it was the busman, who knocked down the woman.

“The driver is still at large and we are working with the police to get him arrested. We have also taken the bus to the police station.”