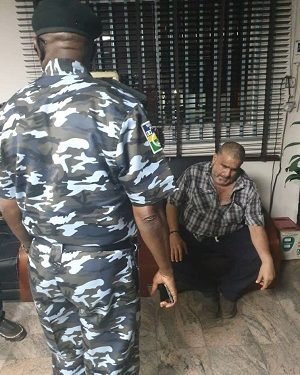 The police in Rivers State have rescued a Lebanese Nollywood actor, Bilal Nosser, who was kidnapped by gunmen recently.

Nosser was abducted in Imo State by gunmen. He was rescued while his captors were taking him to Ndashi forest in Etche Local Government Area of the Rivers State by his abductors.

According to reports, the police team attached to Okehi Police Station also arrested one of the kidnapped suspects in a sting operation carried out on Saturday.

According to the Punch, Nosser, who is popularly known as Mr. B, was said to have been seized by his captors while he was in his Toyota Venza, which was also recovered by the police.

Joseph Mukan, Rivers Police Commissioner, in a statement, on Saturday, confirmed the rescue of the Lebanese and arrest of one of his captors identified as Faith Nwagor.

“Operatives of the Okehi Police Station led by the DPO in a sting operation last night stormed a forest in Ndashi, Etche Local Government Area, where they rescued Mr. Bilal Nosser, popularly known as Mr. B.

“Bilal Nosser is a renowned Nollywood actor, who was kidnapped in Imo State and taken to a forest in Ndashi, where he was rescued by the DPO and his team.

“In the course of his rescue, one of the members of the gang by the name Nwagor Faith ‘m’ who was keeping watch over him was arrested, while others took to flight. He has made useful confessions and named other members of his criminal gang.

“Also, the Toyota Venza belonging to the victim has been recovered,” Mukan said in a statement signed by the State Police Spokesman, Mr. Nnamdi Omoni.

The state CP further disclosed that efforts had been intensified to arrest the fleeing members and recover their operational weapons.