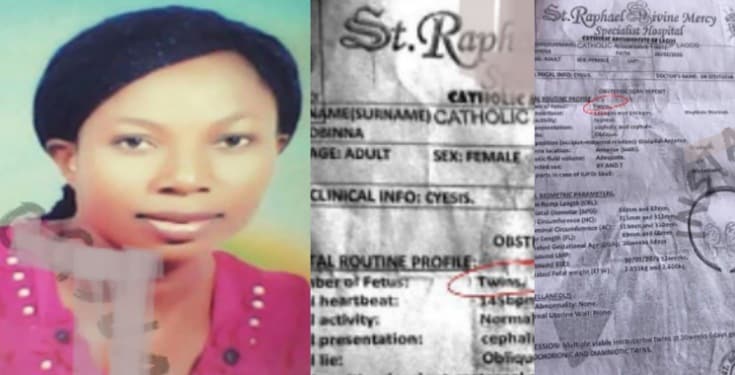 A 31-year-old woman, Faith Obinna has cried out for help after accusing St. Raphael Divine Mercy Hospital in Ikorodu, Lagos State of stealing one of her twins immediately after birth.

The victim, who did several scans in the same hospital which revealed that she was pregnant for twins, claimed she was sedated on the day she had a caesarean section and was later presented with only one of the twins.

The Obstetric scan report dated 26: 02: 2020 and which has the doctor’s name as Otutuoja, indicated that the number of fetus in Faith were twins.

While calling for immediate help from well-meaning Nigerians and the government of Lagos State, she said:

“I delivered on 6th March at Saint Raphael hospital, I had caesarean section because I was pregnant for twins.

Before the cesarean session, I had done three scans in the same hospital, which confirmed I was pregnant with twins.

I was the only one they gave sleeping injection even when I told the doctor before the time not to administer it but they did so that I won’t know when they took my baby but when they brought the two babies out I was still partially conscious because of the injection.”

However, the hospital through a management worker who pleaded for anonymity explained that the lady gave birth to a baby and not a set of twins.