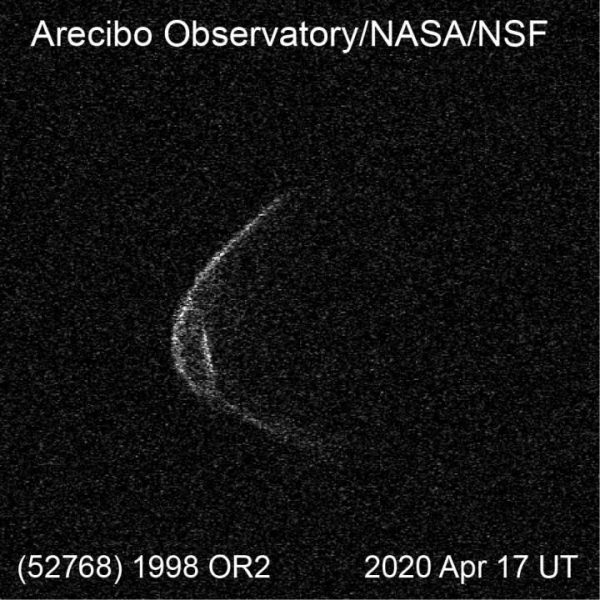 The “potentially hazardous” big asteroid 1998 OR2, which will safely fly by Earth on Wednesday at 0956 GMT, appears to have brought its own face mask for its close encounter with our pandemic-ridden planet.

“The small-scale topographic features such as hills and ridges on one end of asteroid 1998 OR2 are fascinating scientifically,” Anne Virkki, head of Planetary Radar at Arecibo Observatory, said in the statement.

“But since we are all thinking about COVID-19 these features make it look like 1998 OR2 remembered to wear a mask.”

Although it poses no threat to Earth during its flyby on Wednesday, asteroid 1998 OR2 is classified as a “potentially hazardous object”.

This is because it is a rather hefty space rock whose orbit intersects with Earth’s orbit at a distance less than 4.6 million miles (7.5 million km), or 0.05 astronomical units, the average distance between Earth and the Sun.

Using new imagery from the Arecibo Observatory, astronomers have estimated that asteroid 1998 OR2 has a diameter of approximately 1.2 miles (2 kilometers), or about as big as the National Mall in Washington, D.C.

The imagery also revealed that the asteroid rotates about once every 4.1 hours.

The asteroid will make its closest approach to Earth on Wednesday at approximately 5:56 a.m. EDT (0956 GMT), when it will be 3.9 million miles (6.3 million km) from Earth — or about 16 times the average distance between Earth and the moon.