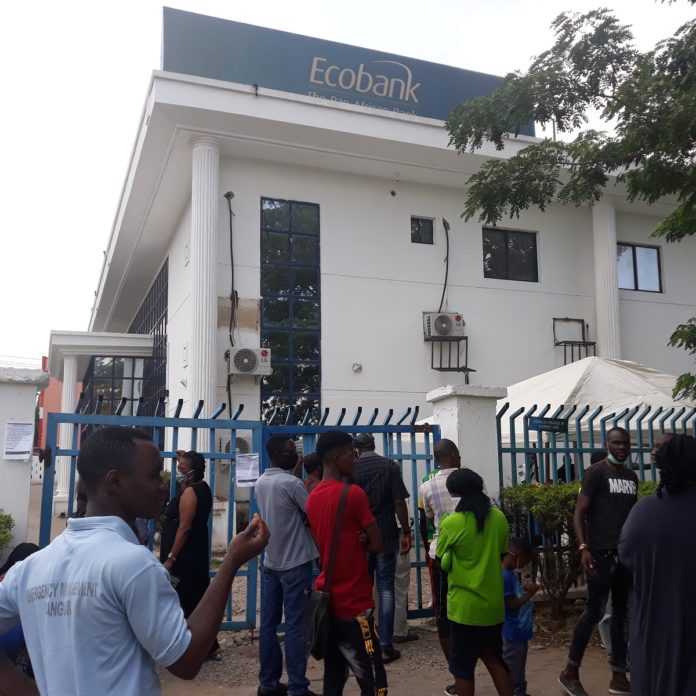 The Pan African Bank by name Ecobank may not be having the best of times – going by the recent developments in Abuja.

The bank appears sliding down a steep slope towards becoming potentially the worst banking institution in the country. This is as 247ureports.com observed how Ecobank in Abuja abandon its customers outside its gated premises against the constraints of covid19.

It is recalled the Covid19 protocol requires for the bank to allow only a specific number of customers into the banking hall at a given time. Also, only two Ecobank branches are functioning in the entire Abuja – one at Wuse Zone 4 and the other at Jabi. The results in customers having to travel from far distances to meet up with the 10am to 12noon banking hours.

On the afternoon of April 27, 2020, at minutes after 11am, an angry crowd was sighted gathered outside the locked gates of the Ecobank located at Jabi, Abuja. The crowd numbering a little over 50 comprising of senior citizens and youths were already angry and threatening breaking down the gates if the Bank staff refuse to open their doors and let them in.

The bank had closed abruptly without reason.

According to one of the customers who spoke to 247ureports.com, the banking hours were supposed to be from 10am to 12noon according to the poster posted on the gate. “But by 11:30am, one of the Bank workers came and told us that the bank has closed and that they will no longer serve the remainder of the folks waiting to gain entrance into the bank”.

The customer who claims to come all the way from Nyanya said she had left her home at minutes after 9am and managed to beat the security posts mounted along the way to guard against unnecessary movement – and arrived the bank premises at minutes after 11am.

Through this measure, the customers were made to wait outside the gated premises – while the uniformed gateman choses who is allowed to enter into the compound and eventually into the banking hall.

It nearly turned violent when one of the bank staff gently walked up to the gate at 11:30am to announce to the waiting customers the bank will no longer accept new customers. The eruption was immediate. The youths were quick to pounce on the gate – while the senior citizens and the women pleaded with the gateman that most of them had come to the bank with their last penny. Some were in tears.

The customer who spoke to our correspondent said she used her last money to travel from Nyanya to Jabi to withdraw money. Her ATM card had been swallowed by a faulty ATM machine.

Another customer [Musa Abdul] said she had a check to cash. “I don’t have any other money on me”. Musa stated he was at the bank on time. “I don’t understand this nonsense. I am not going anywhere still they cash my check”.

247ureports.com made efforts to contact the banking staff but was not able to. The staff seemed unwilling to engage. Instead, the staff called the attention of the law enforcement officers to take over the control of the crowd.