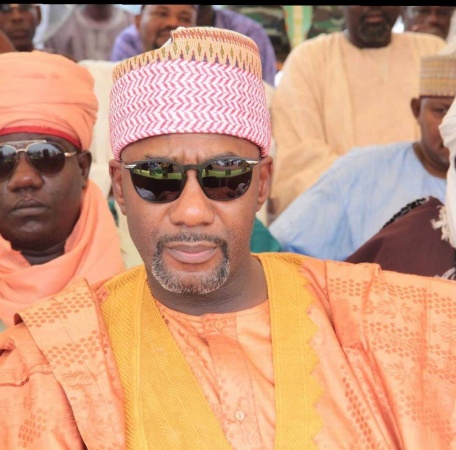 The Lagos Arewa Council of Chiefs has frowned at the alleged allocation of rice to northerners in the state, through the Commissioner of Waterfront Architect Ahmed Kabiru Abdullahi, citing clear misplacement of structural order.

(Galadiman Lagos) made the assertion while speaking on behalf of the Arewa Council of Chiefs,Lagos State, Nigeria.

Bambado faulted the news making the rounds that the said Commissioner via four of his close allies, released tons of bags of rice to supposed northerners, as the individuals were at no time neither delegated nor instructed to stand in for the Arewa Council of Chiefs.

“Anyone who is in doubt of the limits of the powers bestowed on the the Lagos State Council of Chiefs or the office of the Sarkin Hausawan Lagos should visit the Oba of Lagos to have himself educated.

“Any attempt to use the name and office of the Lagos State Council of Chiefs or the office of Sarkin Hausawa for extortion will not be tolerated.

“It is totally unacceptable for any person or group of persons to indulge in cutting corners or going through the backdoor to do underhand deals capable of ridiculing the image and respectability of the office of Sarkin Hausawa”. Bambado said.

The council however, issued a stern warning to the Commissioner for Waterfront to be mindful of allowing his office to be used by shadowy groups of people, who have no legal or Constitutional recognition, as this would amount to collaboration to defraud the government.

“We wish to reiterate that henceforth anyone found using the name of our respected traditional institution to take advantage of anything meant for public good will be faced with legal action.

“We make bold to say that, at an appropriate time soon, we will roll out the new penalities for acts that are confirmed to be dubious by all standards.

“Most importantly, if the Lagos State Government wishes to convey anything that has to do with the legitimate rights of the Northerners resident in the State ( just like this lockdown palliative), it should reach out to the Council of Chiefs through the only known Sarkin Hausawa.

“We say this because anything worth doing is worth doing well, and the palliative is not a privilege but a right.

“The authentic Chairman of  Arewa Council of Chiefs, Lagos State is Alhaji Aminu Yaro Dogara and has  his Deputy, who is also the Sarkin Fulani of Lagos – Alhaji (Dr) Mohammed Bambado; and  Sarkin Hausawan Idi-Araba remains Alhaji Idris Haruna.

The Galadima Lagos noted that the Lagos State Council of Chiefs or precisely office of Sarkin Hausawa of Lagos has never delegated or nominated anyone to receive palliatives on behalf of Northerners in Lagos.

” The Council of Chiefs and office of Sarkin Hausawa of Lagos has not seen even a single grain of rice purportedly from either the Commissioner for Waterfront or the Lagos State Government.

“The fellow who made the social media broadcast on the rice allocation needs to prove who mandated him to approach the Lagos State Government on behalf of Northerners, when the Lagos Council of Chiefs, to which the Sarkin Hausawa belongs was there as the legal and constitutionally recognized body of elders.

Bambado however,said that whoever is in doubt of the capacity of the Lagos Arewa in council can make enquiries for better understanding from the Oba of Lagos,who accords them recognition in the society.