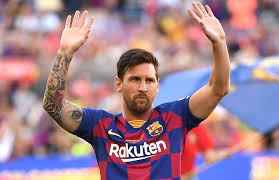 Many will argue that the name of Lionel Messi is synonymous with football due to his consistent contribution to the round leather game through the years.

The Argentine talisman has demonstrated that he can be regarded as one of the greatest footballers of all time with credit to his six Ballon d’Or awards; a remarkable feat that is reserved to him.

Messi has enjoyed some fabulous years in the Spanish league with Barcelona helping them to boast of ten domestic league titles and four UEFA Champions League trophies with his outstanding 627 goals in his 718 appearances.

Though, many through the years have tipped the now 32 years old to leave Barcelona for fresh challenge with other clubs or leagues like his fieriest rival in Cristiano Ronaldo.

However, there is no doubt that there are any football clubs around the world that would not fancy the prospect of having the unbelievable Messi in their team considering his unparalleled contributions to the game of football.

Meanwhile, National Daily learnt that things could be changing for the Argentine captain in the coming transfer season as the former Inter Milan president Massimo Moratti has backed the Italian giants to complete a sensational swoop for Lionel Messi this summer.

Remarkably, the claim comes more than a decade after the Italian giant once triggered Messi’s £132million release clause as an 18-year-old is 2006, only for the Argentine to reject the switch.

Strangely though, there appear to be some discordant tunes at Nou Camp lately giving room for a crack in the once rosy professional relationship between Lionel Messi and the Catalonian club.

National Daily gathered that Messi and his team mates have been hit with a 70% pay cut to help their club and their non-playing staff through the crisis as created by the coronavirus pandemic.

Again, National Daily recalls that this comes after the Barcelona captain had a public spat with former teammate and current director Eric Abidal over the dismissal of Ernesto Valverde as manager earlier this season.

Oddly, Messi has just a year left on his contract and there is a feeling he could be tempted by a fresh challenge.

With the advent of summer transfer window in sight, Barcelona have been linked with a big-money move for Inter’s Lautaro Martinez – and Moratti believes that may pave the way for Messi to move in the other direction.

The former Inter Milan President maintained while speaking to Radio Rai: “I don’t believe Messi is a forbidden dream at all. Maybe it never was even before all this misfortune.

“He is in the final stretch of his contract and, without doubt, it would take a tremendous effort to bring him here. I don’t know if the current situation changes anything for better or for worse.

“But I think we will see some strange things at the end of the year. Martinez is a good boy who cares about his career.

“But we will see if he’s part of a deal to bring in more important players like Messi.”