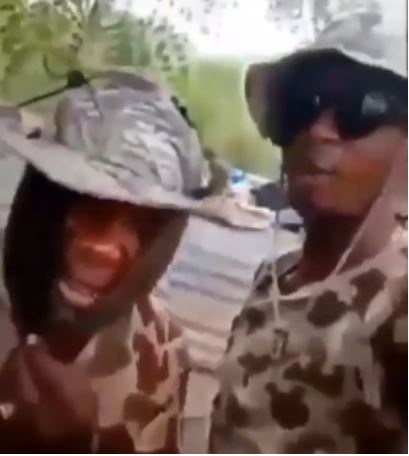 The two soldiers who made the threat

It is going to end up in tears for two soldiers whose video earlier today circulated in which they were seen threatening to rape women in Warri and infect them with HIV in retaliation for the alleged killing of their colleague.

Human rights activist, Segun Awosanya, popularly known as Segalink, has revealed that investigation is now ongoing and that the two soldiers will be arrested before the end of today for prosecution.

Recall that Youths in Ugbuwangue, Delta state, had attacked soldiers yesterday, April 2, after a man named Joseph Pessu was killed in the area for disobeying the lockdown order.

Reacting to the attack on soldiers, two soldiers recorded a video promising to retaliate. They informed Youths in Warri that they will rape their mothers and daughters without protection and infect them with HIV.

The video has been widely condemned and Segalinks has said that “Investigation is ongoing and these miscreants will be arrested before end of day.”

He wrote: “This is barbaric and unprofessional. Needless to say that investigation is ongoing and these miscreants will be arrested before end of day. The @HQNigerianArmy is an institution & with the cooperation of the public it will not be denigrated by cancerous nodes such as this.”