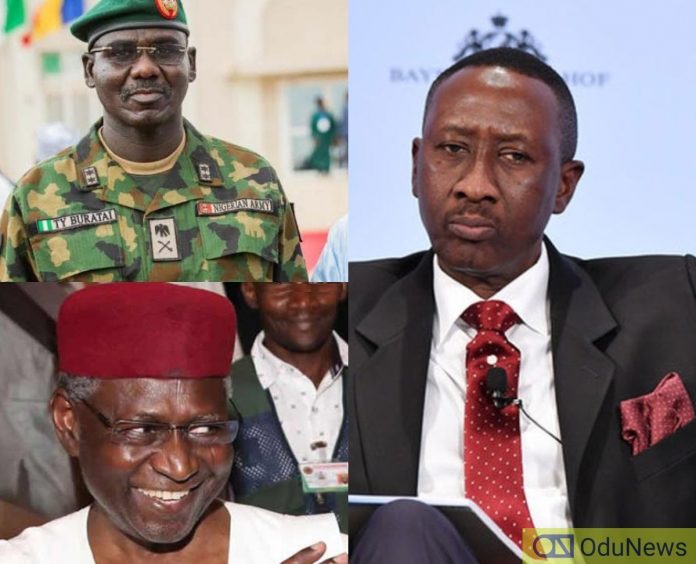 The friction in Buhari presidency is deepening without anyone intervening to restore discipline. The two principal officers in the presidency at war, the National Security Adviser to the President, retired Gen. Babagana Monguno, and the Chief of Staff to the President, Abba Kyari, are beginning to have other political appointees queue behind them in a seeming fight-to-finish friction in Nigeria’s seat of power.

There are indications that a leaked document appears to show that the Chief of Army Staff, Lt. General Tukur Buratai, may be taking sides with the Chief of Staff, Abba Kyari, to fight the NSA, Babagana Monguno.

It was alleged that COS Buratai had ordered immediate withdrawal of security details comprising of top army officers attached to the Office of the National Security Adviser (ONSA) earlier in the month since the battle had been raging silently in the presidency before the public exposure.

It was revealed that seven colonels and three army generals serving at the NSA office were directed to redeployed from the NSA office on February 4, 2020, without any replacement.

Security sources were said to have revealed that subsequently, the remaining team of 13 army officers at the NSA were redeployed to another duty post on February 10. Thus, the ONSA facility was said to have since then been abandoned without army protection.

A report in PREMIUM TIMES indicated that documents showed that 23 army officers assigned to the ONSA were posted out without being replaced in two batches on February 4 and 10.

It was noted that retired General  Monguno was out of Nigeria  at the time the postings were effected. The NSA was said to have rejected the entire exercise as a charade on his return to the country; ordering the army officers to ignore Buratai’s directive.

It was added that Buratai has not changed his decision; the COS was said to have remained adamant over two weeks the first letters of deployment were sent out.

The officers redeployed from the ONSA were identified to include two majors-general, one brigadier-general, seven colonels, seven lieutenant colonels, five captains and one lieutenant.

It was further indicated in the PREMIUM TIMES report that officers affected in the ONSA redeployment include Adeyinka Famadewa, a major-general, principal staff officer to the NSA. “Ado Ibrahim, a colonel and military assistant to the NSA, was also transferred and given three days to report at his new posting in Jaji, home of the military infantry in Kaduna State,” the report added.

It was noted that beside core intelligence analysts of non-uniform career, the NSA office has always been staffed with personnel from security and law enforcement agencies. It was disclosed that the Nigerian Army, Nigerian Air Force, Nigerian Navy, police, State Security Service, the Economic and Financial Crimes Commission, the National Intelligence Agency, the civil defence, Nigeria Customs Service, Nigeria Immigration Service assign office to the ONSA.

The Chief of Army Staff may have been provoked by Mongono’s letter to President Muhammadu Buhari complaining of the service chiefs, who many have been demanding to be sacked by the president for failure to contain security crisis ion the country, have been reporting to the Chief of Staff, Abba Kyari and holding meetings as well.

Perhaps, the reluctance of President Buhari to sack the service chiefs as demanded by Nigerians, including the National Assembly, may be hypothetically, traced to the Chief of Staff purportedly giving them protection and prevailing on the president.