There was pandemonium in Tyo – Mu settlement, a Makurdi of suburb following bloody crisis among Tiv ethnic group, which led to the setting ablaze of 30 houses on Thursday.

The crisis, which has become a recurrent decimal, is said to among Tiv groups claiming ownership of land in a settlement located at the bank of River Benue with a large Fadama, which those living around the area used for moulding of burnt bricks in dry season and rice, cassava and yam farm during raining season

There is Tiv group in the community who call themselves indigenes and refer to another group, which also lived there for more than 100 years as settlers.

An eye witness, Terna Aker, told The Nation that trouble started when a Tiv group called Ihyarev (indigenes) attacked those they referred as Kparev (settlers), who were moulding block at the bank of River Benue .

They asked them to vacate the river as they were no longer wanted, Aker stated.

“Before we could pack our buckets and cloths and leave they bounced on us (Kparev) and matcheted some of our people,” he alleged.

Aker said he narrowly escaped death but his house was set ablaze as the attackers moved the fight from the bank of River to the main land and set Kparev houses ablaze. 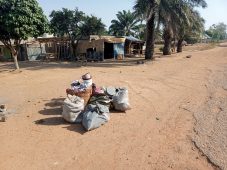 At as press time, houses along Tyo- Mu, located on Makurdi – Gboko federal highway, were set ablaze with smoke billowing in the sky.

Residents were seen leaving the settlement with mattress and women with children on their backs to safety areas.

Since 2015 general elections when crisis escalated, there had been no peace among the Tiv community in Tyo- Mu.

Hardly did a week pass without one or two persons being killed.

Police spokesperson Kate Sewuese Anene confirmed the crisis and said a team of Policemen have arrived the scene to maintain law and order.

He called on security agencies to protect Kparev people from extermination.