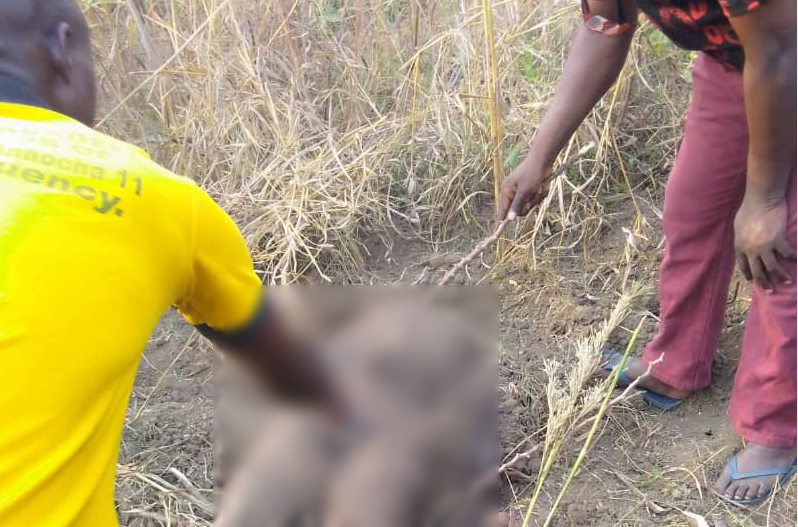 A 53-year-old man, Tagbo Okoye has allegedly been sacrificed to ‘Anaku Deity’ after he was killed on his farm at Omor Community in Ayamelum local government area of Anambra State.

It was gathered that Okoye was killed by two suspected young men from Anaku a neigbouring community for alleged sacrifice to a deity in the community known as ‘Ekwensu’.

Speaking with Daily Sun, the cousin brother to the deceased Mr. Johnson Ifejika said that his killers cut-off his head, penis, heart, ankle, and hands before they buried him in a shallow grave.

He said, “My brother who was a widower was declared missing on January 10, 2022 after he went to farm to harvest cassava at about 8am and did not return.

“The matter was reported to the police and we organized a search party who moved to the farm in search of him till night we returned home to no avail.

“We continued the search with the security agents till yesterday when we saw a shallow grave and his corpse was exhumed with his vital organs missing. It was an indication that he was killed for Anaku deity sacrifice which is done every year.

“We learnt that the two names of alleged killers have been given to police by the community leaders but they are yet to be arrested” Ifejika added.

The Chairman of Ayamelum LGA, Benjamin Anyavulu Onyeabor, who confirmed the incident, said that he made effort to calm the situation by holding back the youths of Omor from reprisal attacks.

He added, “I want to say that the DPO in Anaku division has failed in his duty and should be sacked or removed from the area. Since yesterday the names of the killers were submitted to the DPO he refused to arrest them and prosecute them according to the law.

“There is calmness in the area as security operatives comprising police, army and DSS have been stationed in the area to maintain law and order.”

The Anambra State Police Public Relations Officer (PPRO) ASP Tochukwu Ikenga who confirmed the incident said that the corpse has been exhumed deposited at morgue for autopsy.

He said that the cause of the death of the man has not been ascertained as an investigation was ongoing to unravel the motive behind the killing.

“Yes, our Divisional Police station in Anaku discovered a corpse of a man in farm at Omor. For now we cannot ascertain the cause of the his death but his corpse has been deposited at morgue for onward autopsy.

“We are calling on the people of the community to volunteer information that will be helpful to the police in the cause of our investigation.

“The place is calm as police command has drafted some policemen to the area to maintain law and order” Ikenga stated.

It was gathered that in May last year four young men from Omor community were also abducted and allegedly killed as sacrifice for the deity in Anaku community.

KanyiDaily had also reported how Rev David Nabegmado was murdered by his nephew for allegedly rejecting deity in the mission house in Tema Community, Ghana.