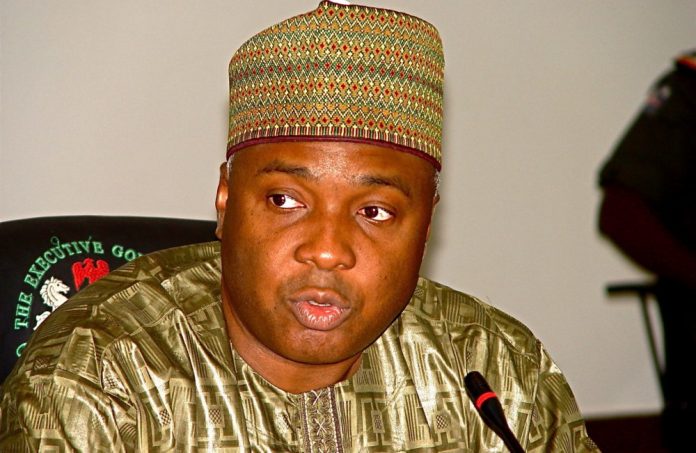 The former President of the Senate of the Federal Republic of Nigeria, Dr. Bukola Abubakar Saraki, has continued to consolidate his consultations across the country for the presidential ticket of the Opposition Peoples Democratic Party (PDP) in the build up to the 2023 general elections. The former President of the Senate has also been receiving endorsements from notable stakeholders in the country. Saraki is personally leading his consultation and lobby group in the mobilization of support across the country.

Meanwhile, the consultation and mobilization of support by all presidential aspirants for the 2023 general elections are currently limited to the respective parties, from where members will decide who gets the party’s presidential ticket for the election.

Former President of the Senate, Dr. Saraki, had led his group to notable stakeholders in north central Nigeria, including former Head of State, retired general Ibrahim Babangida in Minna, Niger State. National Daily had earlier reported that IBB has endorsed Saraki for the 2023 presidential election. National Daily also recalled that IBB had in an interview with ARISE TV News disclosed that the next president of Nigeria will be in the early 60s, adding that he has already seen three of such persons who are doing well in their endeavours.

Saraki had also led his team to Benue State after the emergence of Dr. Iyorcha Ayu as the National Chairman of PDP where he told Governor Samuel Ortom in Makurdi that the north central has secured one position but that it remains one which, he said, is bigger than the one the zone has got already. Saraki had told Governor Ortom that he will be coming back for the bigger one, which is the presidential ticket of the PDP.

Recently, members of the Forum of Peoples Democratic Party (PDP) former Lawmakers in the Kwara State House of Assembly have revealed their endorsement of Saraki for president in 2023.

Chairman of the Forum, Dr. Abraham Ashaolu, conveyed the view of the members that the zone has to rise and support the best among them to raise their stake in the country.

Dr. Ashaolu noted that the north central zone has been the balance of power region in Nigeria’s power equation, adding that the time has come for the zone to take its rightful place in the country’s leadership.

Saraki played influential role in the reconciliation of aggrieved members of the PDP, being leader of the PDP Reconciliation Committee. He has been instrumental to the unity and cohesion of the PDP over the years.