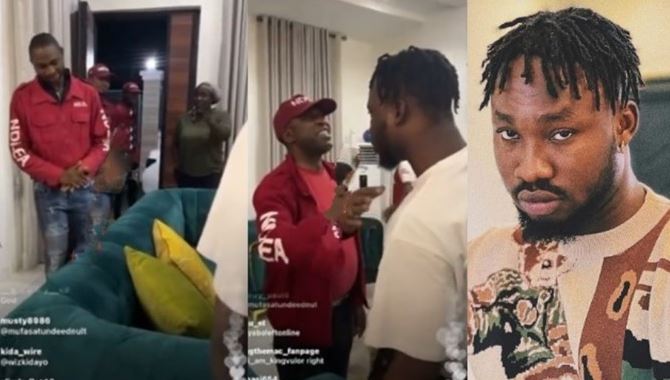 In a video circulating the social media, De General was seen talking to the NDLEA operatives about accessing his apartment before their heated exchange escalated into an alleged assault.

Another comedian, Debo Adebayo, popularly known as Mr. Macaroni, confirmed the incident in a video shared on his Twitter page where De General could be seen arguing with men in red jackets until the device filming was knocked off.

Sharing the video, Mr Macaroni said: “So you people’s work is to enter people’s houses in the middle of the night to beat and harass citizens. This is happening right now. We don’t know where they have taken him to. Oppressors everywhere.”

NDLEA!!! OLEEE!!! Barawoooo!!!!
So you people’s work is to be entering people’s houses in the middle of the night to be beating and harassing citizens. This is happening right now. We don’t know where they have taken him to. Oppressors everywhere!!! pic.twitter.com/0dlgE3oMLK

Spokesperson of the NDLEA, Femi Babafemi told TheCable that De General is being held in the agency’s custody following his arrest on Wednesday.

Babafemi, who didn’t comment on the viral video, claimed that certain illegal drugs were found on the skit maker during the raid, thereby necessitating his arrest.

Swipe to watch the videos of De General’s arrest

This comes a few weeks after BBNaija star, Khloe Abiri accused an NDLEA female officer of assaulting her at Lagos Airport which also led to her missing her flight.