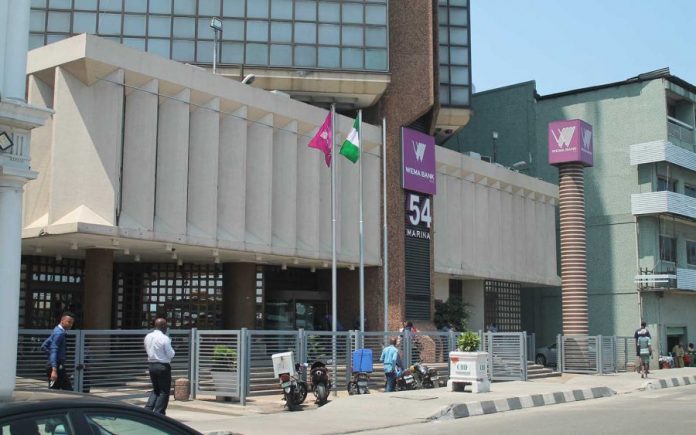 TNG made the charge on Tuesday in a statement signed by Dahiru Mohammed, the Communications Director.

The body accused the Managing Director of the Bank, Ademola Adebise of “covering up a massive fraudulent scheme perpetrated by companies and proxies of All Progressives Congress (APC) candidate, Ahmed Bola Tinubu”.

“Mr Adebise failed in his fiduciary duties and allowed a powerful politician to use Wema Bank as a clearing house for laundered funds”, it noted.

It stated that after Apara’s outburst in 2018, associates of Omobola Tinubu, who were allegedly running a shell company, moved to protect their interests.

Apara had mentioned Ocean Trust, in court documents, as one of the firms allegedly used to siphon cash from Alpha Beta, Lagos State Government tax collector.

Via text, Head of Marketing Communication at Wema Bank, Funmilola Falola, said she was indisposed and could not speak.

Chief Finance Officer, Tunde Mabawonku, said the claims against the bank had a political undertone.

The official reminded our correspondent that Tinubu declared on Monday and that accusations against politicians increase in an election year.

“I’m not even aware of the allegations, I don’t think I’ve heard of them (TNG) before. But the appeal will be to check the reliability or the credibility of the group.

In his writ of summons filed at a Lagos High Court on October 2, 2020, Apara alleged that Tinubu demanded 70 per cent of the shareholding through surrogates.

The claimant categorically proclaimed that Alpha Beta was involved in fraud, tax evasion and money laundering.

He said the consultants got more than N150billion as a 10 per cent commission for “computing, tracking and reconciling” Internally Generated Revenue (IGR), a job description that sparked outrage.

Apara told the court that the amount was collected over 10 years and insists he is the brain behind the revenue collection “hijacked” by Tinubu when he was Governor.

The defendants are Alpha Beta, Tinubu, and the current MD, Akin Doherty, Commissioner for Finance under Tinubu.

But Alpha Beta maintains it did nothing wrong. In a statement, Doherty accused Apara of trying to make headlines to deflect attention from his criminal activities.