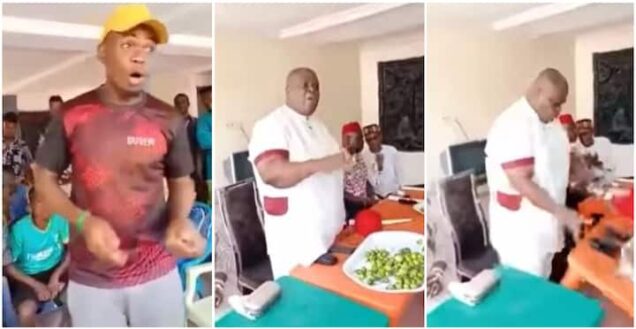 Chiji Collins, a member representing Isiala Mbano state constituency in Imo, was caught on camera reacting angrily after a constituent challenged him and asked him not to run for another term due to his poor performance.

In the video circulating on social media, Collins who was a former speaker of the Imo state house assembly, was seen being questioned by a constituent over his performance as a lawmaker in the last four years.

The young man pointed out the alleged failures of the lawmaker and now asked the former speaker to give reasons why he deserve another term when the support been given to him for the past years yielded no political dividends.

The constituent said, “The last campaign he went for at honourable Onugadi’s house, he was making a speech that day, and I stood up and asked him, you’ve served for four years but did not do anything for Eziaba.

“I asked him if he forgot something at the government house, and he replied that he forgot his pant, and so I told him to step down because he hasn’t done anything for Eziaba.”

The courageous young man was still talking when the lawmaker stood up in anger and tried to shut him, but the constituent refused and kept pointing out his faults.

The lawmaker then angrily pushed the table in front of him, overturning the table that has a plate of kola nut and other items for refreshment.

The development caused a commotion as the meeting ended with the lawmaker’s allies trying to calm him down and control the crowd.

KanyiDaily recalls that Chiji Collins was impeached as the Speaker of Imo State House of Assembly over allegations of financial impropriety, high handedness, and gross misconduct among others.