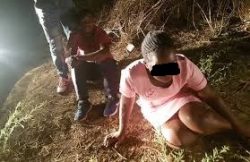 A 14-year-old form one student from Kibera Nairobi county, narrates how the two college boys queue to abuse her repeatedly in the bush, leaving her nursing several injuries.

Mercy Kamua (not the real name) said James Njogu who’s popularly known as Mzanii, together with his friend Daniel Wafula (not the real name) were remanded in police station as they await for mental assessment, for committing a sinful act to her in the bush during Christmas day.

According to reports filed by police officers, the complainant had enough evidence to convict the suspects in the case of two counts of second-degree defilement and related charges, for attacking and forcing her to have an act in the bush without using protection.

The victim told the police that the suspects have been making sexual advances to her, while on their way home from the church during Christmas day, threatening to mete out ‘disciplinary action’ against her if dare to resist.

Mercy continues saying that she knew the suspects as a good people since he joined that village, and on that particular day, they joined her in celebrating the birth of Jesus Christ in their church.

Without hesitating, the victim went to see them as earlier agreed, and the suspects told her that they wanted to talk to her privately.

Since they had no time because of busy schedule, they proposed to meet her nearby cypress plantation, at outside the church compound.

The suspects found the innocent girl already standing beside the main entrance to church compound, where they pulled and force her to have an act repeatedly in the bush without using protection.

The eyewitness told the media that the victim screams loudly alerting the neighbors, after she was forcefully dragged by the suspects into nearby bush, where they defiled her repeatedly one after the other.

Confirming the incident, the county children department unit in their statements to media said the 14-year-old victim was taken to the hospital for medical examination, and an expert report for subsequent investigation is on the way.

They further said the bloodstained clothes of the victim, and a subsequent medical examination conducted by the medical consultant hospital, shows that indeed the victim was sexually assaulted.