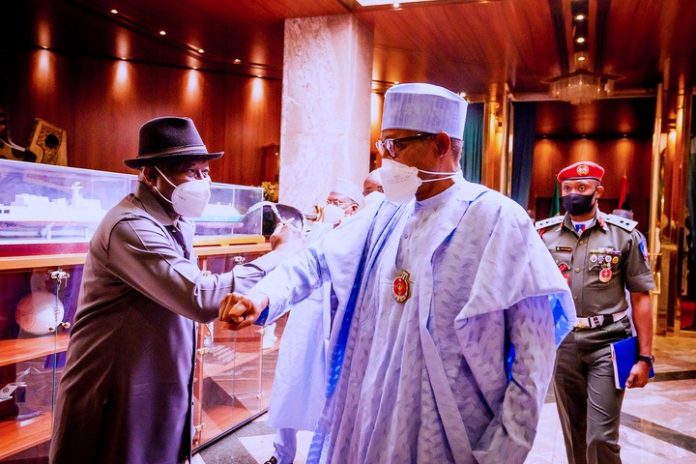 Panic in APC, PDP over Jonathan’s deepening relationship with Buhari

There are emerging indicators of panic in the ruling All Progressives Congress (APC) and the Opposition Peoples Democratic Party (PDP) over perceived deepening consultations between former President Goodluck Jonathan and incumbent President Muhammadu Buhari in the build up to the 2023 general elections. The apprehension, according to a ruling party source, is not unconnected with insinuations that President Buhari may be negotiating the participation of former President Jonathan in the 2023 presidential election. this was said to be generating the phobia of a likely defection of former President Jonathan from the PDP to the APC before the end of the year.

The party source disclosed that the speculated defection is generating apprehension of threat to the existing status quo in both parties, where some party leaders and stakeholders have set up structures for the 2023 electioneering campaigns. The most frightened party stakeholders were said to be the various presidential aspirants in the ruling APC, who were said to be fretting that they may no longer have opportunity of getting the party’s presidential ticket.

However, in the PDP, the probable exit of former President Jonathan was said to be generating the phobia that the party may lose many party members, including some governors, to the APC. Invariably, the PDP may be depopulated of valuable members that could reinforce the APC in the 2023 general elections.

There were earlier reports of APC leaders from the north making overtures to former President Jonathan to join the party for the presidential ticket which is believed to have been zoned to the south. Thereafter, the report suddenly vanished from the public space, but reemerged in the early part of this week.

At the most turbulent time of the report purporting the defection of former President Jonathan to the APC, former President of the Senate, Dr. Bukola Saraki, had led the PDP reconciliation committee under his leadership to visit the former President at his residence. At the end of the consultation meeting, Saraki disclosed that Jonathan admitted there were disturbances but that he remains a bonafide member of the PDP.

Meanwhile, the 2023 presidential aspirants are dominated by northern politicians, followed by politicians from the southwest. The joining of the presidential race by former President Jonathan may offset the prevailing arrangements in both parties in many ways.