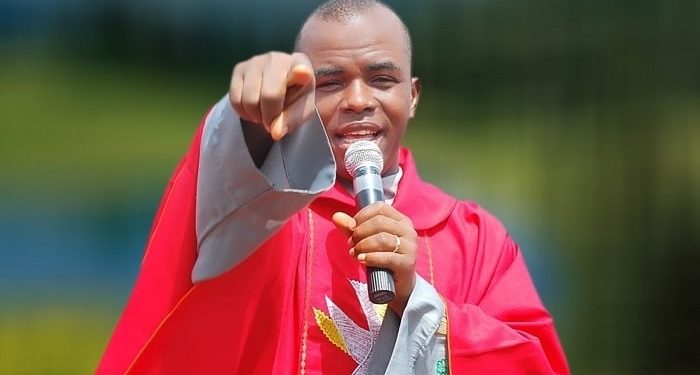 Nnamdi Kanu: Nigeria’ll Collapse If Anything Happens To Him – Fr Mbaka Says In Fresh Message [VIDEO]

Rev. Father Ejike Mbaka, Spiritual Director of the Adoration Ministry Enugu, has warned that if Mazi Nnamdi Kanu, the leader of the proscribed Indigenous People of Biafra, IPOB, is killed, the country will collapse.

The controversial preacher, addressing during a sermon at the adoration ground, urged the Department of State Services, DSS, and the Federal Government against mistreating the secessionist in a video that has gone viral on social media.

Mbaka, who added that the IPOB leader is agitating for independence as a result of bad administration by corrupt politicians in the country, said the FG should instead focus on resolving the issues that have led to secession agitation.

He said, “The DSS people and the government of this country should better handle Nnamdi Kanu’s case with care; if anything happens to that young man in their hand, this country will collapse.

“Nnamdi Kanu’s reaction and intervention is as a result of bad government due to wicked leadership. By now, all the political leaders are supposed to be under DSS cell because of what they have done to Nigerians.

“Nnamdi is just an agitator and he is agitating because of something. Let them solve the problems”.

According to reports, Nnamdi Kanu has been in the custody of the Nigerian secret police since June 2021, following his detention in an unnamed nation to complete his trial.

Kanu, who jumped bail in 2017, is currently awaiting his trial on treasonous felony charges.

President Muhammadu Buhari promised not to release the agitator in an interview with Channels Television on Wednesday, saying he should finish his trial in court.