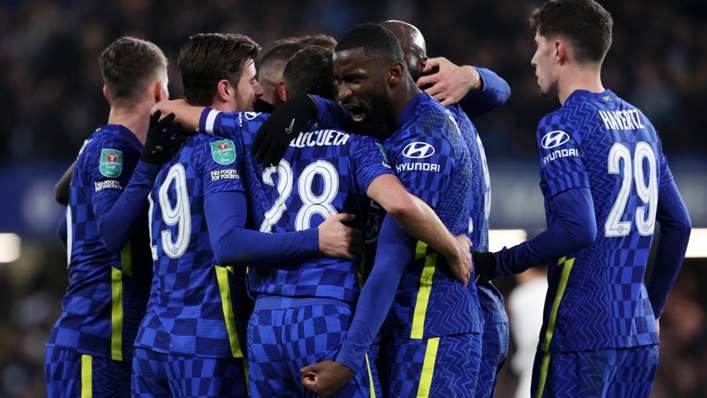 Chelsea put one foot in the EFL Cup final thanks to a comfortable 2-0 victory over Tottenham in Wednesday’s semi-final first leg on a chastening return to Stamford Bridge for Antonio Conte.

Thomas Tuchel, seemingly eager to put recent indiscretions to one side after an apology, reinstated Romelu Lukaku to his starting XI, though Chelsea’s victory arguably said more about Spurs’ defence than the hosts’ attack.

The Blues were ahead inside five minutes as Kai Havertz punished a Japhet Tanganga error at the back, and a comical Ben Davies own goal had Chelsea cruising at the interval.

Spurs improved somewhat in the second 45 minutes but were fortunate not to concede more goals, with Timo Werner spurning a couple of excellent opportunities, perhaps giving Conte’s men a lifeline for the return leg.

Lukaku should have made a swift impact when released into the box in the first minute, only to bizarrely opt for a cut-back that went to no one.

Spurs gifted them another chance soon after, though, and Chelsea took it – Marcos Alonso cut out Tanganga’s dreadful pass and fed Havertz, who found the net despite Davinson Sanchez’s best efforts.

The dominant home side made it 2-0 just past the half-hour mark, Tanganga’s unchallenged headed clearance bouncing back off Davies and going in.

Spurs, who introduced Tanguy Ndombele at half-time, were brighter early in the second period, with Harry Kane testing Kepa Arrizabalaga via a 20-yard free-kick.

Still, the best chances went the way of Chelsea and Werner, who first shot agonisingly wide and then saw Hugo Lloris just about reach his lobbed effort after an exquisite pass from Hakim Ziyech.

A late Ndombele effort from Bryan Gil’s pull-back was then well saved by Kepa as the Blues kept their clean sheet intact.