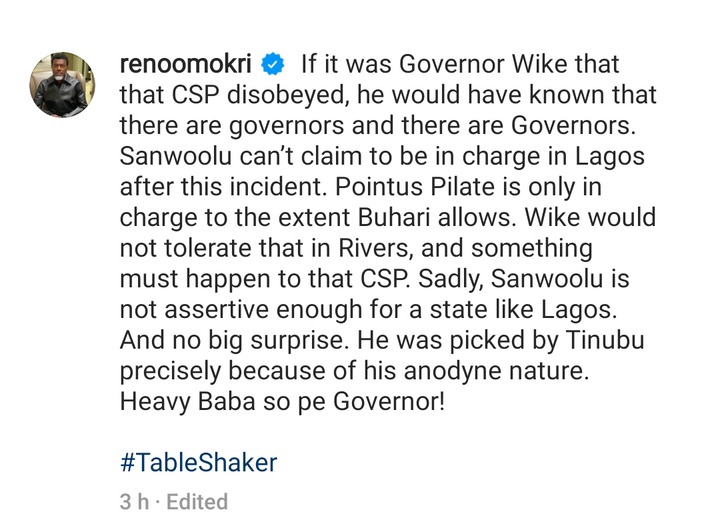 Magodo Saga: If it was Gov. Wike that the CSP disobeyed, something would have happened to him, Reno says

In a video making its round on social media, a Chief Superintendent of Police (CSP), can be seen defying the order of the Lagos State Governor, Babajide Sanwo-Olu, to vacate the Magodo Phase 2 Estate area of the state.

In the viral video, the CSP told Governor Sanwo-Olu that he and his colleagues were at the estate on the orders of the Inspector General of Police, Usman Baba, as well as the Attorney General of the Federation, Abubakar Mallami (SAN).

This viral video of the CSP openly defying the order of Governor Sanwo-Olu of Lagos State, has generated mixed reactions amongst Nigerians. Based on that former President Goodluck Jonathan’s aide, Reno Omokri has decided to air his opinion through a post that he shared on his verified Instagram page.

According to Reno Omokri, if it was Governor Nyesom Wike of Rivers State that that CSP disobeyed, he would have known that ‘there are governors and there a Governors’.

He went further to state that Governor Wike won’t tolerate that in Rivers State, and that something must happened to that CSP. He continued by stating that Governor Sanwo-Olu is not assertive enough for a state like Lagos.

What do you think about this topic? Have your say by dropping a comment below.