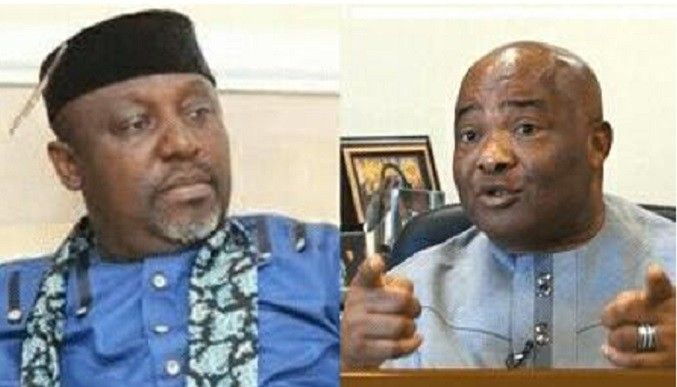 Imo State governor, Senator Hope Uzodimma has accused ex-Governor Rochas Okorocha and his son-in-law, Uche Nwosu of being the brains behind banditry and kidnapping in the state.

The governor’s chief press secretary, Mr Oguwike Nwachuku made the allegation in a statement on Tuesday.

He said, “For the avoidance of doubt, Okorocha and Nwosu have been specifically mentioned by suspects who are in the custody of security agents, as being sponsors of kidnapping and banditry in Imo state, using their relationship with former ex-militants to perpetrate the crimes.”

Uzodinma claimed that Okorocha, now senator representing Imo West District and Nwosu, who served as his chief of staff when he was governor, were “bent on using both overt and covert means to blackmail the police high command, which legitimately arrested Uche Nwosu.”

According to him, “They are also actively seeking to dent the image of the fine security officers attached to the governor of Imo state.”

This accusation followed Mr Okorocha’s own claim that Mr Uzodimma was using security forces to carry out rogue operations.

Okorocha had said at a press conference last week that, “It appears to me as though the misery behind unknown gunmen has been unravelled by recent happenings. And what is (sic) unknown gunmen? Unknown gunmen now are set of policemen from government house.

“They get instruction from the government led by Hope Uzodinma and his CSO Shaba to go and arrest people, lock them up at will, and sometimes the whereabouts of these people are unknown.”

Okorocha had added that the elements described as ‘unknown gunmen’ in Imo State may soon be uncovered after the arrest Nwosu, noting that Nwosu’s arrest at a church on Sunday fortnight ago, gave a glimpse into how the Imo State government carried out criminal acts with policemen attached to Government House.