Residents of Magodo Phase II Estate in Lagos are protesting the presence of over 50 armed policemen on their estate. 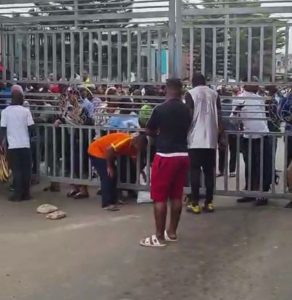 The management early Tuesday shut the two gates leading into the estate.

The closure led to the disruption of vehicular movement.

People were allowed to exit the estate, but were restricted from entering.

They queried the presence of the policemen who were said to have been in the estate since last month.

Some of the inscriptions read: “Lagos Attorney-General prosecute those involved in illegal invasion of Magodo Phase 2 you promised”, “Magodo Phase 2 has been under siege of the IGP’s anti-riot police squad for three weeks”.

Speaking with our correspondent, the Chairman of Magodo Residents’ Association, Bajo Osinubi, said: “We called our people out to protest this morning.

“Over 50 policemen are living within the estate. We want the police out of our estate.

“There is no cases of kidnapping, rioting, but why are they still here? We want them out of our estate.

“We want to live in peace. This is a business between Lagos State government and the Adeyiga family.

“We are under seige; the police have been here for two weeks, they came in December to take possession of properties on behalf of Adeyiga family and others.

“Since then, we’ve gotten in touch with prominent personalities to intervene and get the police off our estate.

“We are victims, even inside our own homes. The police have been here. They are very restless.

“Just imagine there is an altercation between a resident and the police. The easiest way to avoid any of such scenario is to detach the police officers back to Abuja.

“We’ve allowed people to go out, but we are protesting this morning to let the world know what’s going. We are supposed to be at work, but we want the whole world to know what’s happening at Magodo.

“We’ve allowed people to go out, but we are protesting this morning to let the world know what’s going. We are supposed to be at work, but we want the whole world to know what’s happening at Magodo.

“The governor spoke with me yesterday (Monday), and he said he’s ontop of it. He has promised to address the situation.

“The Commissioner of Police last week sent the DCP Ops to supervise the withdrawal of troops but they claimed they are yet to get signal. We learnt the police were drafted from Abuja.

“Our immediate concern is to get the police out of the estate for us to leave in peace.

“We need the government to do the needful to get the family off our neck.

“About four to five years ago, they did it, and now again this year, they want to do it.”