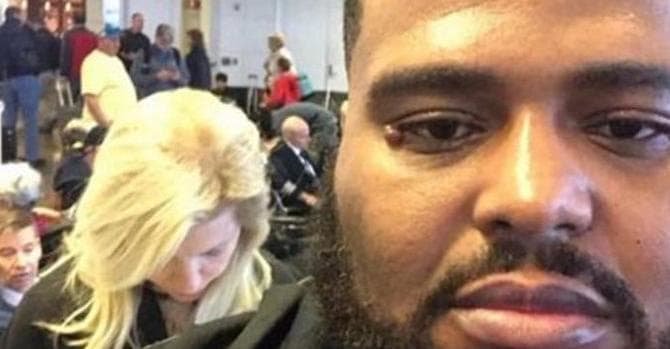 Man responds to racist lady in plane boarding line, gets a round of applause

When a man was waiting in line at the airport, a woman tried to cut in front of him because she didn’t believe that he had a first-class ticket. While the man may have been wearing a sweatshirt, it spoke nothing about his status. He was a high-powered music executive. The incident happened when Emmit Walker was flying to the Dominican Republic for his 37th birthday.

He was leaving from the Ronald Reagan Washington National Airport in D.C. and was standing in the priority boarding line like he should be, when a white woman rushed up and tried to cut in front of him because she didn’t believe he was a first-class flier.

Because he felt that she was racist, he took a photo of her and wrote about the interaction on Snapchat. But he later regretted it because the post went viral and received more attention than he thought it would.

Her: Excuse me. I believe you may be in the wrong place. You need to let us through. This line is for priority boarding.

Her: Yes. Now excuse me. They will call y’all after we board.

Me: *Shove first class priority boarding pass in her face* You can relax ma’am. I’m in the right spot. Been here longer, so you can board after me.

Her: *Still won’t let it go* He must be military or something, but we paid for our seats so he still should have to wait.

Me: Nope too big to ever get in anybody’s military. I’m just a n**** with money.

Everybody waiting in line starts to clap.

At the time, Walker was angry and eager to call out this woman for her racism. But only a day later, he regretted that he had done it, so he shared a quick update on Facebook:

“When I posted that post on Facebook I didn’t expect all that to come from it. I can honestly name the four or five people I thought would comment with something funny, and that will be it. This racist stuff is definitely an issue, but this is not the solution to that issue.”

“It brings me no joy waking up in paradise for my 37 bday and knowing that woman might be going threw hell. The story was definitely real, just like this issue is definitely real, but I now know that I myself should have handled it another way, or left it how it was, and not shared it publicly.”

One reader from London wrote, “I received the same only two days ago from the check-in staff. Was told my box was over weight (more than the 24kg allowance for economy). She looked silly after she discovered I was actually traveling upper class with the allowance of 32kg. Typical stereotyping.”

Many people wonder why he felt like he needed to apologize. She not only stereotyped him, but she also slandered military people.

“Why is he apologizing? She is rude, arrogant, and deserves the notoriety….. she might think before she goes off next time!”