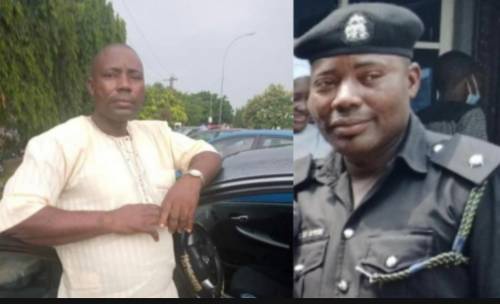 How the phone of officer allegedly killed by RRS van chasing ‘Yahoo’ boys, suddenly disappeared after his death

National Daily report how a police officer got killed by the van of Rapid Response Squad officers of the Nigerian police, while they were chasing some internet Fraudsters.

The officer, Ojo Ayeni, who was riding on a bike was crushed by RRS van chasing suspected internet Fraudsters who were in a mercedes Benz, from the opposite direction of the road.

She claim that when she saw her husband lifeless body at the back of the van, there was blood everywhere. They didn’t allow her take his lifeless body with her.

However she raised an alarm after discovering that her husband’s phone was missing. She claimed that the phone was in his pocket when he left her shop before the unfortunate incident, but the line has been switched off. It seem as though one of the people who carried the body into the police van must have taken his phone.

Stealing a phone at the scene of an accident is not just unacceptable, it is inhumane, wicked and unprofessional.

In civilised countries, when there are such tragedies, the police seals the entire scene of the incident making sure no one comes close, while gathering every piece of evidence from the scene.

This is why the police need to be more professional in making sure they do not allow third parties into such situation to avoid situations like this. However, if an officer was behind this act, that officer needs to be fished out and severely punished.

What are your thoughts