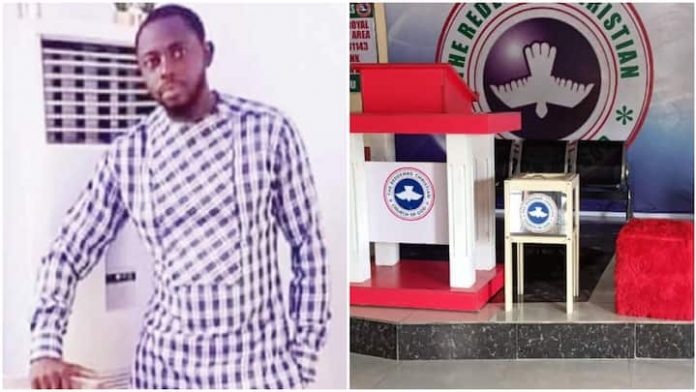 Why we kill RCCG pastor – Suspects

Meanwhile, more insights have emerged on how a pastor with one of the Redeemed Christian Church of God (RCCG) parishes in Festac Town, Babatunde Dada, was killed. The police in the state have arrested two persons who claimed to be entertainers in connection with the murder.

The suspects gave their stage names as J Frosh and Zealight and both claimed to have been in the music industry for about three years.

National Daily report that the cleric was killed because of an unspecified amount of money that he was holding.

Pastor Dada was killed in the church auditorium situated on 6th Avenue, FESTAC Town on 2 December, 2021. The suspects claimed to have come to Lagos in the hope of performing at different shows for the December period but after their hope was dashed, they had to seek accommodation in the church where the deceased man was a pastor.

The Commissioner of Police, Odumosu, paraded the suspects before newsmen on Friday, saying that one of them was arrested in Ilorin, Kwara State, while the other one was arrested in FESTAC Town.

The commissioner identified the suspects as Farouk Muhammed and Jamiu Kasali, saying that the weapons used in killing the cleric had been recovered.

The CP said: “On 2nd December, 2021, at about 12:00 hrs at 6th Avenue, FESTAC Town, Lagos, the duo of Farouk Muhammed, m, aged 35 and Jamiu Kasali stabbed and killed one Babatunde Dada, m, aged 46, inside a church where he worshipped.

“The deceased, until his death, was a pastor in the Redeemed Christian Church of God, FESTAC.

“The suspects, after committing the murderous act, absconded to unknown places.

“However, following intensive and discreet investigations, the two culprits were arrested in their criminal hideouts.

“The suspects, during interrogations, confessed to have killed the victim with a bottle and a stick. The exhibits used in perpetrating the dastardly act were recovered.”

In an interview with newsmen, one of the suspects, Kasali, said: “We went to the pastor under the pretext of lack accommodation to assist us and we were given where to sleep in the church pending when they would get us a better place.

“One fateful day, the pastor came to the church in the morning and gave us money and left but a few hours later, he walked in with a bag containing money. Because Farouk’s mother had called him and told him to come back home that she was sick and he needed to go home with money, we quickly hatched a plan to get money.

“We followed the pastor upstairs and hit him with a plank and stabbed him with a bottle in the neck and escaped with the money.

“It was because Farouk lied to his mother that he was coming to Lagos for a show and we didn’t get any show to play and he needed money to go back home to Ilorin in Kwara State.

“He had already promised his mother that from the show he was coming for in Lagos, he would make N200,000. We believed we were going to get a show and perform because we were in December already where a lot of activities take place.”

Also, Muhammed claimed that the need to take money back to Ilorin after they had failed to find any show to perform in Lagos led to the killing of the pastor. He said that they had no intention of killing the pastor but that was the only way they could succeed in the operation.