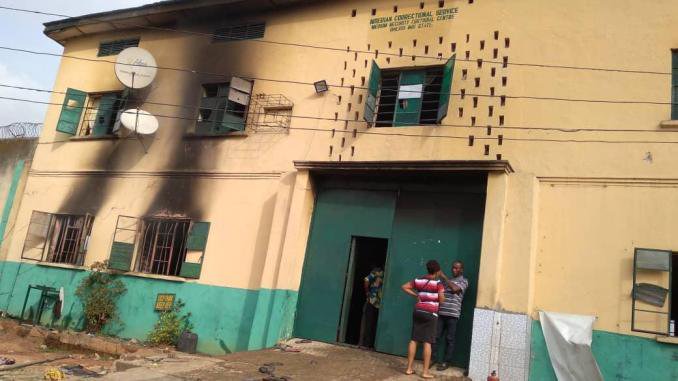 An inmate on death row and two others awaiting trial for armed robbery have escaped from a prison in Ilorin, north-central Nigeria in fuzzy circumstances which officials are trying to unravel amid the incessant jailbreaks across the country since 2020.

The escapees are Umaru Altine, the inmate on death row having been convicted for armed robbery, Segun Nasiru, and Isa Usman, both charged with armed robbery and awaiting trial, officials briefed on the matter told PREMIUM TIMES.

They escaped in the “early hours” of Thursday, December 30, 2021, from the new custodial centre at Mandalla, Ilorin, Kwara State “after cutting the iron of the cell,” one official said.

Internal communications reporting the escape have been issued but investigations were still ongoing to “unravel the circumstances surrounding the escape.”

The spokesperson for the correctional service, Francis Enobore, confirmed the escape but said the exact details had not emerged. “I got the report but who was involved and how it actually happened I cannot confirm,” he said “But the management has initiated an investigation and a report would be out soon.”

The Guardian reported in April last year that the Mandala centre has a capacity for 115 persons but holds more than 500 inmates.

Apart from the Ilorin escape, correctional service officials are also having fresh jailbreak fears in Edo State, where four prison attacks happened between 2020 and 2021.

This time, prison intelligence officials are reporting plans by convicted inmates at the Old Benin Custodial Centre to bring arms into the facility for the purpose of causing another jailbreak, internal communications also revealed.

The weapons are to be “concealed in a pillow and thrown across the perimeter fence at an undisclosed date and time,” prison intelligence sources said.

The intelligence officials are recommending the mobilisation of armed squad personnel at the Benin centre to “beef up the external perimeter fence coverage.” They also want intensified searches and vigilance at the centre.

Mr Enobore, the spokesperson, said he could not confirm the jailbreak threat in Benin but said: “the correctional service is aware of the tendency of anyone incarcerated to want to want to leave even if by force.”

He said much of the problem the correctional service “has faced has to do with jail attacks, external attack from armed hoodlums, not internal insurrection from within.”

Between 2020 and 2021, over five thousand inmates escaped from Nigeria’s overcrowded prisons across at least 11 states.