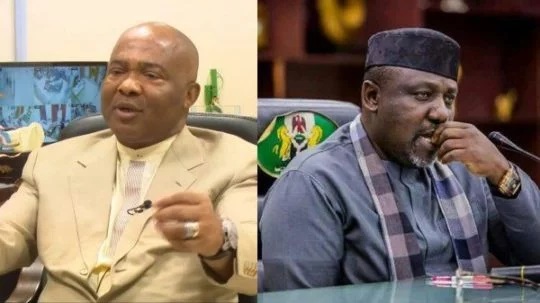 Okorocha, Uzodinma Worked Together To Remove Ihedioha, Behind Insecurity – IPOB

In a statement by IPOB spokesperson, Emma Powerful, Okorocha and Uzodinma fall out after ganging to oust Emeka Ihedioha.

Hope Uzodinma and Rochas Okorocha have been exposed as the two politicians sponsoring insecurity in Imo State, according to the proscribed Indigenous People of Biafra (IPOB).

IPOB made the accusation in a statement by IPOB spokesperson, Emma Powerful.

He said Okorocha and Uzodinma fall out after ganging to oust Emeka Ihedioha resulted in the insecurity situation in the state.

According to the pro-Biafra, youths armed by the duo are responsible for the Insecurity in the southeast state.

According to Powerful: “We the great family and movement of the Indigenous People of Biafra (IPOB) under the command and leadership of our great prophet and indefatigable liberator, Mazi Nnamdi Okwuchukwu KANU wish to draw the attention of the world that based on the unfolding security issues in Imo State, it has become very obvious that Gov. Hope Uzodinma and his predecessor Rochas Okorocha, are the sponsors of the so-called unknown gunmen perpetrating insecurity in Imo State for some time now.

“We have always explained that unknown gunmen were created by selfish and greedy politicians entangled in political war but many people did not believe us. Uzodinma and Okorocha first went into alliance in their desperation to oust Gov. Emeka Ihedioha, and they did a lot of abnormal things to achieve that selfish goal. Soon afterwards, they fell apart and resorted to other heinous schemes including but not limited to recruiting and arming hoodlums to outsmart each other.

“Their calculation was to blame the nefarious activities of their evil boys on IPOB and Eastern Security Network ESN operatives, an erroneous narrative many gullible minds had hitherto believed. Until the abduction of Okorocha’s son in-law, Uche Nwosu in the church by Uzodinma’s hitmen, many didn’t believe politicians were the masterminds of the insecurity and activities of unkown gunmen in Imo State and other parts of Biafra land.”