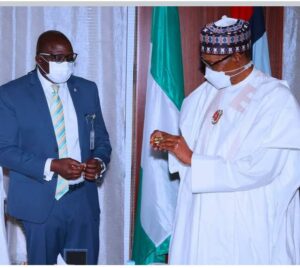 The President spoke at the State House when he received in audience the Honourable Minister of Police Affairs, Muhammad Maigari Dingyadi, who came to present to him the newly elected Vice President (Africa), and Executive Committee Member of INTERPOL, Assistant Inspector-General of Police, AIG Garba Baba Umar.

While congratulating the Inspector General of Police, Usman Alkali Baba, who was also at the event, for having one of his men representing the whole of Africa, President Buhari said: “This is very good for our Police and I hope that the IGP would take note, now that one of you is representing the whole of Africa, it is something that you must take to the police especially the officer corps so that they can put in more effort in trying to cope with our security challenges.”

The President also extended his congratulations to the new Vice President of INTERPOL, urging him not to relent on his good records.

The Honourable Minister of Police Affairs in his remarks said AIG Garba Baba Umar had always distinguished himself in the service in various capacities and his election into the prestigious seat was well merited.

AIG Umar was elected into the position on November 25, 2021, at the 89th General Assembly of INTERPOL which was held at the Halic Congress Hall, Istanbul, Turkey. Before his new position, AIG Garba headed INTERPOL National Central Bureau (NCB) in Nigeria.

The 2021 General Assembly was attended by 470 Police Chiefs, Ministers and Senior Law Enforcement Officials from the 195 INTERPOL member countries.

AIG Garba who has put in over 30 years of policing experience both at national and international levels will be in office for three years.

During the election in Turkey, Nigeria’s delegation to the 89th INTERPOL General Assembly was led by Dingyadi. IGP Usman Alkali Baba, Chairman of the Economic and Financial Crimes Commission (EFCC), Mr. Abdulrasheed Bawa and the Chief of Naval Staff, Vice Admiral Awwal Zubairu Gambo (represented by the Naval Provost Marshal) were also there.