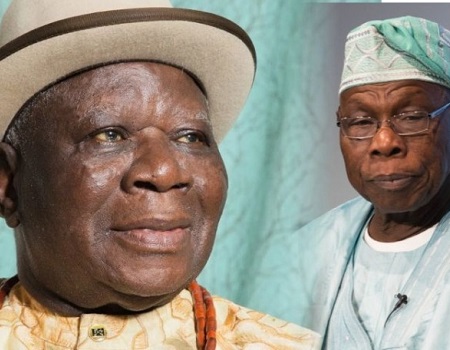 Crude oil or any other minerals located in any territory in Nigeria do not belong to the areas they are found,  former president, Olusegun Obasanjo has told foremost Ijaw statesman, Chief Edwin Clark.

In his response Tuesday to a letter he received from the former federal commissioner of information who had complained of the former president’s “unprovoked outburst against the people of the Niger Delta,” Obasanjo asserted that the ownership claim of crude oil by Niger Delta amounts to creating sovereign entities within a state.

Obasanjo maintained that those who purchase crude oil from Nigeria enter into contractual relationship with Nigeria and not the Niger Delta, as he added that if for any reason the region is threatened by external forces, it will be the responsibility of the federal government to mobilize to defend the area.

He said just as the crude in the Niger Delta, he stands on the same logic in respect of the gold being mined in Zamfara state.

The former president however added that he had proposed that equity and justice demand that those domiciled in these locations are entitled to more of the material benefits accruing from the crude oil or other minerals.

President Obasanjo stated in an open letter to Clark: “Let me proceed with the mast basic constitutional fact that you cannot have two sovereign entities within a State which is what your position of Niger Delta ownership claim of the crude oil found in that location amounts to.

“All those who purchase crude oil from Nigeria enter into contractual relationship with Nigeria not with the Niger Delta. The territory of Nigeria is indivisible inclusive the resources found therein. No territory in Nigeria including the minerals found therein belongs to the area of location and this remains so until the federation is dissolved.

“This is the position of the Nigerian Constitution and International law. If there is a threat of violence to any part of Nigeria today including the Niger Delta it is the Nigerian military backed by any other machinery that can be procured or established at the Federal level that will respond to any such threat. In principle and practice, the position I have taken on the location of mineral resources in any part of Nigeria is the legal and constitutional position.

“May I also recall the adjunct position I proposed that equity and justice demand that those domiciled in these locations are entitled to more of the material benefits accruing from the crude oil or other minerals.

“At the end of the day, it may transpire that out linguistic differences on this matter are no more than semantics. And we stand on the same logic with respect to the criminal mining of gold deposits in Zamfara State today or any other State in Nigeria or any other part of Nigeria.”

He added: “The Constitution that affects Niger Delta Region affects Zamfara State where gold is found and if anybody at the Federal level has remised in implementing the Constitution, then that is a different matter.

“The gold in Ilesha, Osun State, and the lead in Ebonyi State, all come under the same Law and Constitution.

Obasanjo rejected allegations that he was angry or distraught against the Niger Delta saying that he always dwelt on leadership performance.

He said: “There is no part of Nigeria whose interest is not dear to my heart.  And stating in your letter that it is only the interest of the North I continuously hold dear to my heart is that type of buka gossip that, knowing you as I do since 1975, I am not surprised that you echoed.

“I have always stood for equity and justice in our Federation and, for me, tribe has to be suppressed for the state to emerge.  And until the state emerges, Nigeria will not make the desired progress as tribesmen will always sacrifice state for tribe.  This has always been my position and it will remain my position until I breathe my last.

Obasanjo buttressed his position with the 1963 Constitution, which he said Clark had earlier cited, saying: “I will now quote the relevant Section 140 for the  Nigerian public to arrive more informed and balanced understanding of our discourse.

“My dear Chief, where in this constitutional provision is it said or implied that minerals located in any part of Nigeria belongs to that location? For emphasis and to further buttress the point, the provision is even in the exclusive list – exclusively reserved to the Federal Government!”

“The Constitution that affects Niger Deita Region affects Zamfara State where gold is found  and if anybody at the federal level has remised in implementing the Constitution, then that is a different matter,” he added.

Obasanjo conceded that the country is going through a tough time

“This is certainly not the best of times for Nigeria and I understand and empathise with your frustrations but we must be guarded and measured in the expressions of such frustrations lest we throw away the baby with the dirty birth water,” he declared.

Defending his position, he said: “For me, personally, I have never shown any anger or distraught with Nigeria Delta Region nor with any part or Region of Nigeria.  Rather, I have always picked points on leadership performance or policies and I will continue to do so.

“Even when a particular part of Nigeria decided not to vote for me and their leaders told me that in clear terms, I showed understanding and not anger or distraught and disabused their minds on what I believed they got wrong.  And in subsequent elections, they voted for me.

He told Clark: “I could not have mentioned to you any grievances against the Niger Delta Region during my social visit because there was never anyone and there cannot be anyone.

“But if you take my holding a constitutional position on federalism and reiterating the position of our past Constitution – 1963 Constitution – as I understand it as anger or grievance against the Niger Delta Region or Nigeria Delta people, that will be a very wrong position to take because until I can be legally and constitutionally persuaded otherwise, I will continue to hold my ground.  And it is not a matter of emotion or threat or name-calling which do not throw light on the issue or walkout which does not strengthen any argument or debate.

“What you call outburst is my own way of calling or attracting attention. I raise my voice or stamp the desk such that those who are sleeping would have to wake up to listen to me.  Even in bilateral discussion, I consciously tap the other person to ensure that I am attracting his or her attention.

“I have had experience that it was when the person I was talking to started snoring that I realised he was not listening to me.  But if raising my voice, stamping the desk or tapping is unpleasant to anyone, I tender unreserved apology.

“If I interjected to either complete a statement or to correct a statement being made that I believe was not the true situation, I have no apology for that.  Truth must be stated and upheld no matter how bitter it may be.”

Obasanjo recalled that the Nigerian Civil War was fought to maintain and secure the territorial integrity of Nigeria to which the Niger Delta is integral, adding: “I leave you to second-guess what would have become the fate of the Southern minorities and your ownership claims of the crude oil located in your backyard in the event of a contrary outcome. How do we pay homage to the memory of those who gave their lives to ensure the successful outcome of the civil war including the millions who perished on either side of the war?”

The former president said the allegation that he only defends the interest of the north is “a buka gossip,” saying: “Some of the languages you have deployed to describe me in your letter are offensive, uncouth and I totally and completely rejected them.  I am not inconsistent, hypocritical, unstatesman and nor am I anybody’s lackey.

“You use your own yardstick to judge others.  I fear God and I respect those who respect themselves and I hope it is about time you change from a tribesman to a statesman of character.  That is what Nigeria and indeed the Region you profess to love demand of you at this stage.

“I believe one lesson that we all must appreciate that we have all learned in the last sixty-one years of our independence is that we all need to be civil to ourselves and occasionally put ourselves in the position of others.

“Bad language does not show prudence, wisdom and maturity.  I hope you will think and adjust.  Negotiation achieves better results than dictation.

“I believe that we should be reformists rather than being pedantic with leave-it or take-it attitude.  Together, I also believe Nigeria can be fixed and mended for the benefit of today and tomorrow on the basis of give and take.

“If we all demand what we consider as our rights without yielding and with unbending stature, we will be wrong and record failure at the end of the day.  Reform is a continuous exercise but relatively slow in achieving results.

“Revolution for sea-change may rarely happen and then we may continue to languish in frustration and regret with dire judgement of posterity.”