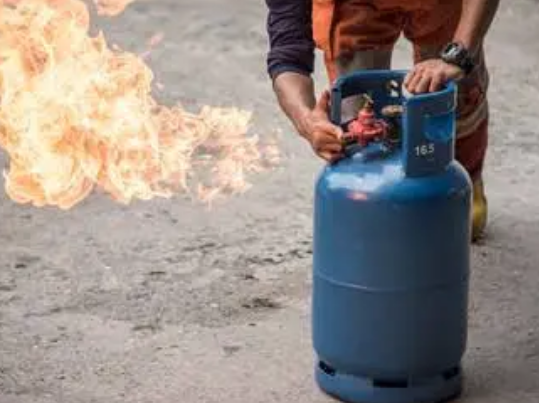 9 Bad habits that might cause gas explosion in your home

Gas explosions are occurring at an alarming rate all over the world these days. And many of them have resulted in serious injuries, property loss, and, in some cases, death. Many people believe that the gas explosion is fated or predestined. However, this is not the case because it is usually caused by the victims’ careless actions while using the gas to cook.

A gas cylinder is a pressure vessel used for the storage and containment of gas used in cooking. And the use of gas cylinders in African homes is becoming increasingly popular. As a result, everyone must exercise extreme caution to avoid accidents. In this article, I’ll tell you nine things you should avoid doing when cooking with gas in order to avoid an explosion. They are listed below;

1. Using a candle to see while gas cooking.

This is one of the riskiest things a person could do. Candles are extremely flammable and should never be kept close to a cooking gas cylinder.

2. Cooking in an unventilated room.

Many people prefer to cook with gas in a room with no fresh air. Please keep the doors and windows open while cooking to keep the room airy and ventilated. It can aid in the prevention of an explosion.

3. Dozing off while cooking with gas.

Sleeping with your gas cooker on is akin to committing suicide. To be safe, it is best if you stand or sit close by while cooking.

4. Moving the gas from one location to another while it is turned on.

To be on the safe side, avoid moving your cooking gas cylinder from one location to another. It is extremely hazardous.

5. Playing near a cooking gas.

Most people and children enjoy playing near a cooking gas without regard for the dangers it may pose.

6. Listening to music through headphones while consuming gas.

When a person is cooking, their total attention should be focused on the meal they’re cooking. Listening to music is also a major distraction.

7. Putting the cooking gas near another gas.

Most family homes have two or more cooking gas stoves. And they sometimes place them all close to each other while cooking. This is extremely dangerous.

8. Taking a phone call while preparing a meal.

Most people enjoy answering phone calls while they are cooking. Because a phone is a very sensitive object, this is a very bad habit that could cause harm.

9. Keep flammable materials away from your gas cooker.

Gallon of petrol, kerosene, hair products, and other flammable materials should never be stored near a cooking gas.