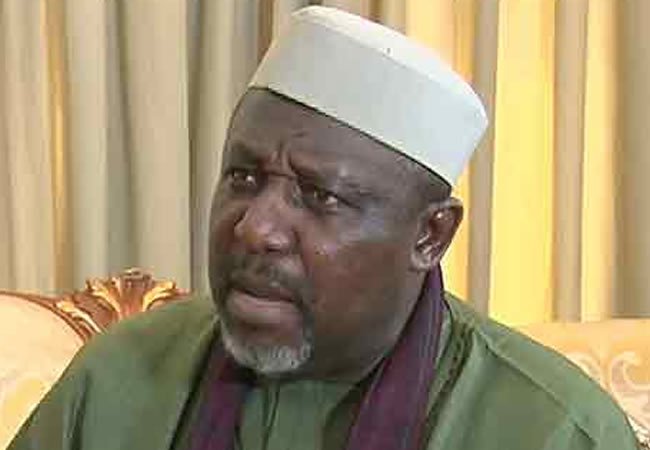 A former Governor of Imo State, Senator Rochas Okorocha, on Sunday said the police operatives who arrested his son-in-law, Uche Nwosu, during a service at St Peter’s Anglican Church, Eziama Obieri in the Nkwerre Local Government Area of the state, pushed his wife, Nkechi, to the ground and tore the clothes of his first daughter, Uloma.

Okorocha, who briefed journalists at his Spilbat mansion in Owerri, the state capital, said Governor Hope Uzodinma deceived the Inspector-General of Police, Usman Baba, into desecrating the church of worship by arresting Nwosu.

There was panic after Nwosu was whisked away from a church service at his home town, Eziama Obieri.

Nwosu and his family were at St Peter’s Anglican Church for a thanksgiving service when the gunmen who operated in an Armoured Personnel Carrier and Toyota Hilux vans stormed the area.

They shot indiscriminately before taking their target away, as his security aides watched helplessly.

But Okorocha, who represents Imo West at the Senate, alleged Uzodinma wanted to frame Nwosu for a crime.

He said that he was waiting on the governor to name the sponsors of the insecurity in the state on January 3 or take responsibility for the killings in the state.

Okorocha urged the police to free his son-in-law or take him to court within the next 24 hours as enshrined in the constitution.

The ex-governor said although the Commissioner of Police in the state, Rabiu Hussaini, had confirmed that Nwosu was being held in police custody, he had yet to establish contact with his son-in-law since he was arrested.

He said “Uche Nwosu, my wife and daughter were at the church for a service when a group of men in police uniform while the sermon was ongoing, started shooting. In the course of their activities, they pushed my wife and they tore my daughter’s clothes. No warrant of arrest, no invitation.

“We suspected kidnapping at first. Many people were injured while running. Uche Nwosu was dragged into a bus carrying the Imo state government number.

“They were identified as policemen from Imo State Government House by their colleagues attached to Uche for the burial. I got the CP who said that IGP approved his arrest.

“The shock of such an arrest without a warrant and humiliating members of my family is unfortunate. Most security operatives in Imo know nothing about the arrest. The IGP could only do this on high-level misinformation from Hope Uzodinma. Over 100 gunshots to arrest Uche Nwosu.”

Okorocha said Uzodinma had shown tremendous hatred for his family, adding that lawmakers who attended Nwosu’s mother burial a few days ago were suspended.

But the state Commissioner for Information and Strategy, Declan Emelumba, said the governor had no hand in what happened, describing the allegation as ridiculous.

Meanwhile, the Imo State Police spokesman, Micheal Abattam, has confirmed that Nwosu was in custody.

The command in a statement said, “This is to inform the general public that chief Uche Nwosu was not kidnapped but was arrested by the police and Imo state police command is aware of the arrest and presently he is in police custody.

“This is to refute the earlier news that has been making rounds on social media that he was kidnapped by unknown persons/gunmen.”