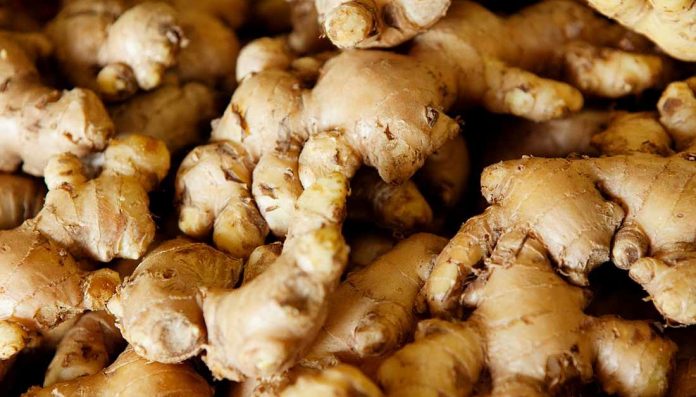 Ginger, also known as Zingiber officinale, is a flowering plant, whose root or rhizome is used as a spice. It can be consumed in many forms, fresh, dried, powdered, and in the form of oil and juice.

The top health benefits of ginger may include its ability to help relieve nausea and pain, improve respiratory conditions, and reduce flatulence.

According to the USDA FoodData Central, it is also rich in carbohydrates, dietary fiber, and protein. In terms of minerals, it has sodium, iron, potassium, magnesium, phosphorus, and zinc. Its vitamins include vitamin C, folate, vitamin B6, riboflavin, and niacin.

While the traditional uses of ginger for better health are numerous, today we can easily add to it the multiple beneficial properties discovered and confirmed by research. Let’s take a look at some of the most popular health benefits of ginger.

Ginger has long been used as a potentially preventive measure for motion sickness and seasickness. A study published in Nutrition Journal reveals that ginger may help in relieving nausea during pregnancy, but was not seen to be as effective in treating problems of vomiting.

It is also frequently used as an appetizer or an aperitif since it can stimulate the appetite while preparing the digestive system for an influx of food. It works well as a carminative, thus helping with flatulence.

Ginger may prevent the occurrence of ulcers, which are generally characterized by bleeding and acute gastric irritability.

According to a study published in 2016 in the World Journal of Gastrointestinal Pharmacology and Therapeutics, it is very effective in inhibiting the growth of H. pylori bacteria, which is ulcerogenic, thus keeping your stomach healthy.

Ginger is known to boost bone health and relieve joint pain associated with arthritis. It may contain gingerol, which has powerful anti-inflammatory properties. It can improve movement in osteoarthritis, knee inflammation, and rheumatoid arthritis, as cited in a study published in Arthritis & Rheumatism journal.

Ginger has been used traditionally as a potential medicine to treat respiratory disorders. Recent studies have also seconded its potential anti-inflammatory property. Zerumbone, an active compound, may help relieve asthma. May Aid in

People suffering from tuberculosis can benefit from ginger, as it helps prevent hepatotoxicity. Animal studies show that it also protects against the liver-damaging cadmium poisoning caused due to the significant ingestion of cadmium. Its essential oil exerts a protective effect against the non-alcoholic fatty liver disease occurring because of obesity.

Animal studies show that ginger can aid in accelerating weight loss and managing obesity by helping boost your metabolism. It may increase exercise endurance capacity so that you work out well and get back into shape to fit in that outfit you were so excited to wear.

Ginger may help regulate the blood sugar levels in people suffering from type 2 diabetes. Glycemic and lipid abnormalities lead to long-term complications in diabetics, as per a research study published in the International Journal of Endocrinology Metabolism in 2017.

A known potential aphrodisiac, ginger was used in many cultures to arouse desire and enhance sexual activity. The book Ginger: A Versatile Healing Herb mentions the use of Ayurveda as an aphrodisiac. Its scent has a unique allure that helps in increasing fertility and establishing a sexual connection. This root also helps increase blood circulation.