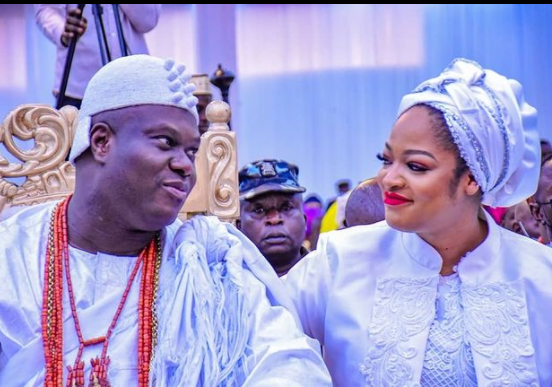 The palace of Adeyeye Ogunwusi, Ooni of Ife, has reacted to the divorce announcement made via the social media account of Naomi Silekunola, the monarch’s wife.

According to Punch, Moses Olafare, the palace spokesperson, said they will commence an investigation to unravel if Naomi’s Instragam page was hacked.

Naomi had on Thursday, via her verified Instagram page, announced her separation from the monarch.

In the post, the queen also revealed some of the issues that prompted the failure of their marriage of three years.

She touched on her protracted “struggles” and the monarch’s preferences regarding his public image.

Silekunola urged the public not to refer to her as “queen of Ile-Ife or the wife of the monarch”.

But in his reaction, Olafare said the post on her Instagram page was “false”, adding that Ogunwusi and Naomi went to bed as husband and wife on Wednesday.

According to the palace spokesperson, separation in marriage cannot be done and announced by a party without the knowledge of the other person.

“We will dig deeper and know what happened, but like I said, all of us just woke up to read about the separation on social media.

“Even by this time yesterday, (Wednesday) kabiyesi was still packaging a special gift for her.

“If you want to separate with someone, you cannot be packaging gift for her. I was aware that Kabiyesi was putting a special Christmas gift together for her.

“If he is not in love with her, he cannot be doing that. In fact, the Christmas gift has been delivered to her already.”

As of Friday morning, Naomi’s post announcing the end of her marriage is yet to be deleted. The post has also garnered nearly 32,000 likes.