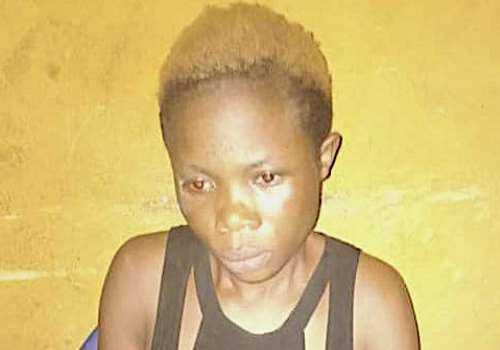 A twenty five-year-old female house help, Dominion Okoro, a native of Calabar, Cross River State, yesterday revealed how she used a stool in the early hours of December 2 to hit the head and killed Madam Maria Oredola Igbinedion, 85, the mother of former Governor of Edo State, Chief Lucky Igbinedion.

Okoro, employed a year and three months before the alleged crime, while being paraded at Edo State police headquarters in Benin-city, disclosed that she made away with N100,000, a wristwatch and jewelry from the residence of the Igbinedions at the Government Reservation Area (GRA), Benin-city.

She said: “I killed mama (Madam Maria Igbinedion) in other to take her money. She did not offend me. While she was sleeping on her bed around 12:01 a.m. on December 2, 2021, I used a stool to hit her on the head while she was shouting for help; the gate man was the only person around but did not hear the shout, so mama later died.

Mrs. Igbinedion was buried in Benin-city on December 10 after a funeral service at St. Augustine Catholic Church in the Edo State capital.

The prime suspect (Dominion’s) elder sister, Patience, was arrested by the police before Dominion was later apprehended and moved to Benin for thorough investigation.

Patience Okoro said neither she nor their parents in Cross River State knew anything about the crime committed by Dominion.

Speaking also, the Edo State Commissioner of Police, Phillip Ogbadu, revealed that it took time, efforts and money to arrest Dominion, with no fewer than 20 persons first nabbed, before the prime suspect (Dominion) was arrested, as she confessed to committing the crime.

He noted that being a state crime, the suspects in the murder of Igbinedion would soon be charged to court, after a thorough investigation, with Dominion being specially worked on and he earlier interrogated her more than three times, stressing that to every crime, there would be parties.

In a related development, Ogbadu pointed out that in the fourth quarter of this year, 427 suspected criminals were arrested for their involvement in kidnapping, armed robbery, murder, burglary and other crimes, with large cache of arms, ammunition and money also recovered from them, while declaring Edo as a no-go state for criminals.

He admonished residents of the state to be security conscious during this festive period, and never to display expensive items in their vehicles in order not to attract armed robbers, and to ensure that their vehicles are tracked, in order to recover them faster, in case of losing them to criminals.