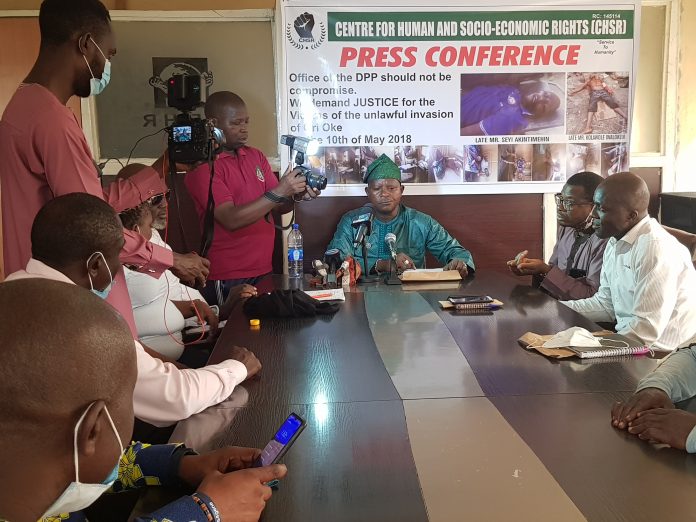 Piqued by the almost four years murderous invasion of Ori-Oke Alala in Makoko without any justice for the souls of the slain and injured victims , the Centre For Human and Socio-Economic Rights (CHSR) has threatened to defy the state government order in demand for justice.

The group called on the office of the Attorney General and Commissioner for Justice Lagos State, to urgently mandate the Director of Public Prosecution (DPP) to charge the matter to court of competent jurisdiction.

According to the President of CHSR, Comrade Alex Omotehinse while addressing a press conference recently at the Right House in Lagos, if no commensurate justice is served on the case a mass protest to barricade the ministry of Justice will be staged.

“In the interest of Justice to restore hope for the deceased and wounded victims if the matter is not charged to a court of competent jurisdiction, we won’t mind to defile the government order on Omicron and stage another mass protest to barricade the ministry of Justice.

“In respect to DPP advice we demanded through our letter dated Monday 1st March 2021 that a proper and urgent prosecution of the perpetrators of the heinous crime against humanity but up till today the ministry of justice has refused to charge the culprits.

Comrade Alex opined that the action is presumed necessary given the various petitions and monitoring accorded the murder case, which has being surreptitiously watered down by certain personnel of the ministry whom allegedly had been compromised to twist the arm of justice. 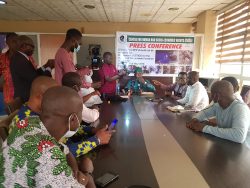 The various petitions which fingered one Mr. Jide Bakare a former Chairman of the Lagos State task force on land grabbing who allegedly led a team of heavily armed thugs and policemen with  a Sergeant Seun Awolu aka Ijaya as main culprits in the dastardly invasion of the ACT of The Apostle Church Ori-Oke Alala Temidire in Makoko area of Yaba LCDA Lagos State, were reeled out to newsmen.

CHSR also stated for reference the Wednesday 23rd of May 2018, five thousand -man protest staged by the Coalition of Civil Society Organisations in Lagos which consists of CDHR,HURIDAC,HCRA,CWI etc. In collaboration with the Ilaje National Alliance Movement (INAMO) to drive home their message on the matter with a petition duly submitted to the Lagos State Governor as well as to the Speaker of the Lagos State House of Assembly.

The group also found despicable the height of suspicious subversion of due process when the case file submitted to the Lagos State Ministry of Justice for DPP advice on the matter as against the normal arraignment of suspect to the magistrate court for murder case.

“Where they stated that the office shall prosecute page B3 Seun Awolu (aka Ijaya) for the offence of manslaughter contrary to section 225 of the criminal law cap c17,Vol.3 law of Lagos State.” CSHR said.