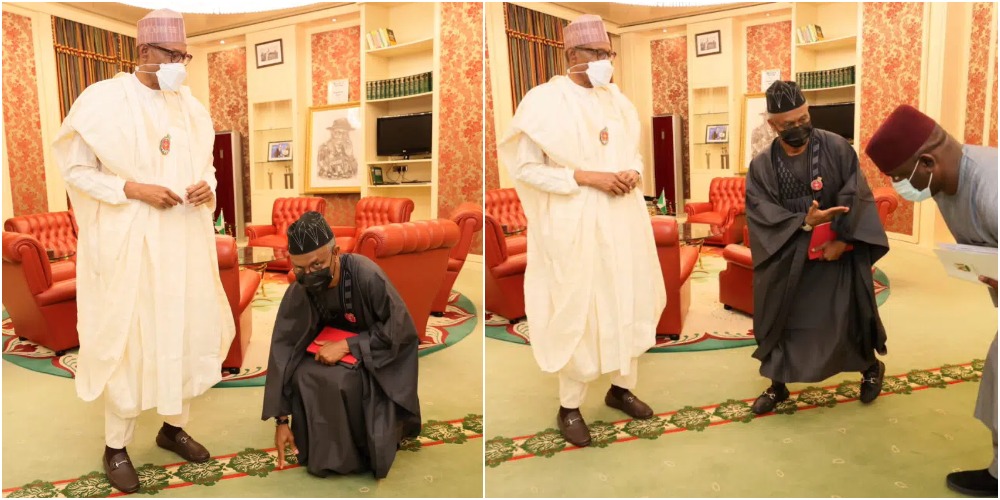 El-Rufai Kneels Before Buhari, Says President Will Move To Kaduna After His Tenure

Kaduna State Governor, Nasir El-Rufai knelt before President Muhammadu Buhari when he visited him on Tuesday at the Presidential Villa in Abuja.

El-Rufai, who was accompanied by Samuel Aruwan, Commissioner for Internal Security and Home Affairs in Kaduna, went on his knees before the president out of respect.

Speaking with reporters after meeting the president on Tuesday, the governor said Buhari will retire to Kaduna when he leaves office in 2023.

According to him, Buhari is a Kaduna citizen because he has lived in the state before he was elected to the highest office in the land.

El-Rufai also revealed the president will spend at least two days in Kaduna in January to commission projects in Kafanchan, Kaduna and Zaria.

He said, “Mr. President has been invited to come and commission some of our projects. He will spend two to three days in Kaduna commissioning projects in Kafanchan, Kaduna and Zaria.

“What you have tried to do in Kaduna is try to catch up. Kaduna was the capital of the northern region. So it had basic infrastructure right from the 60s. But what has happened with that, since Kaduna, gave birth to all the six states in the north that are now 18 states, plus FCT, because they were all administered from Kaduna at one point, other states have grown in the infrastructure provision and overtaken Kaduna.

“And when we ran for office and said we will make Kaduna great again, our objective was to make a Kaduna that state where every Nigerian felt comfortable and retired to, you know, military politicians, that’s why there was a time they were referring to Kaduna mafia, because all the big retired men in Nigeria, and woman went back to Kaduna to retire.

“As you know, the President is a Kaduna-based citizen. He is originally from Katsina state, but he spent most of his life in Kaduna. And he’s retiring to Kaduna. So we hope that he will be happy with what we have done and he will be proud of what we have done as an APC government, and we appreciate all the support that he has given us to enable us to do this.”

Meanwhile, Former President, Olusegun Obasanjo had advised Nigerians not to expect more from President Buhari who he claimed has done his best for the country.