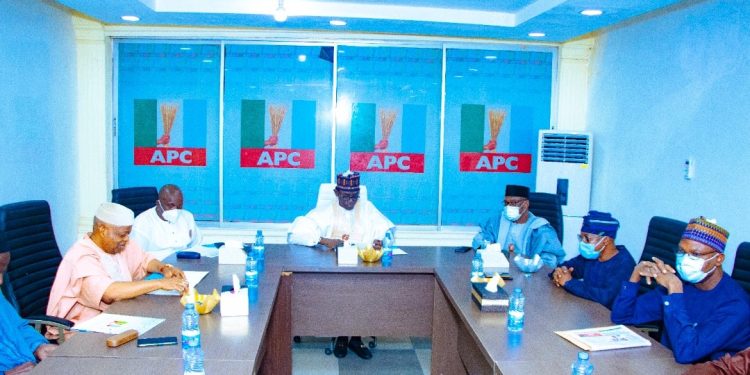 In a big banner chronicling their demands, the protesters urged the Governor Mai Mala Buni-led Caretaker/Extraordinary Convention Planning Committee, to leave when the ovation is loudest.

Some of the inscriptions read; “Buni give us National Convention in February”, “Don’t kill our beloved APC”, “Caretaker committee your time is up”, “Leave when the ovation is loudest”.

The protesters on arrival were resisted by a combined team of security agents and the party’s internal security.

Coordinator of the group, Joe Mesele, said their action was based on their love for the party.

“We can no longer continue to stay on the sidelines and watch things deteriorate to this extent. Our mission here is to press it on the leadership of the party to ensure that the National Convention is conducted unfailingly in February. We are not violent in our protest and will continue to be peaceful until our demands are met. We are not going to be intimidated,” he said.

This comes as the APC Caretaker/Extraordinary Convention Planning Committee (CECPC) has said it will constitute sub-committees ahead of the proposed February 2022 National Convention of the party.

In a communique after a meeting at the party’s national secretariat, APC Caretaker Committee National Secretary, Sen John Akpanudoedehe, said that the party would engage critical stakeholders on issues that affect Nigerians.