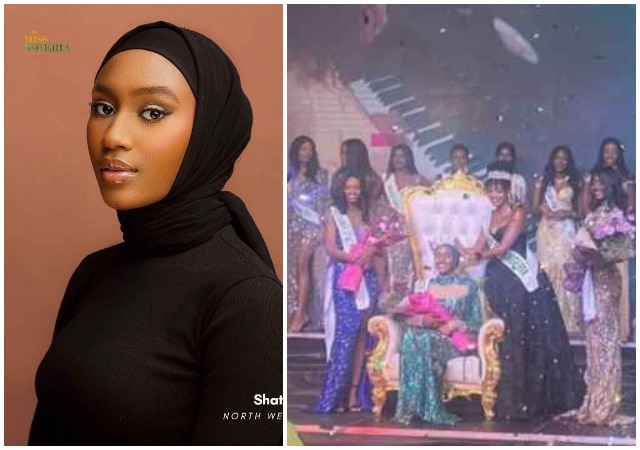 Shatu Garko, a hijab model, 18-year-old has emerged as the winner of the 2021 Miss Nigeria beauty pageant.

Garko, a horse-riding lover, represented the North West region of Nigeria during the pageant.

She was crowned as the 44th queen of the competition during the coronation ceremony held in Lagos on Friday night.

Despite being the youngest contestant, Garko beat 17 others to become the first hijab-wearing model to wear the Miss Nigeria crown.

She is the first ever Hijabi Queen and is passionate about proving that religion and culture are not barriers to following and achieving one’s dreams!

Meanwhile Nigerian superstar, Wizkid Balogun, experiences yet another extreme act from his fans who attacked him on stage.

Wizkid who performed at a concert in Abuja on Friday was met with erratic behaviors from fans who dashed to the stage to hug and touch him.

A fan, in particular, held on to the singer’s leg so tight that it took the effort of the security team of Wizzy to evict the fan from the stage.

In the process, the vocalist fell off his feet, had his designer outfit shredded; it however did not stop Wizkid from telling his bouncers to bring the fan back to the stage.