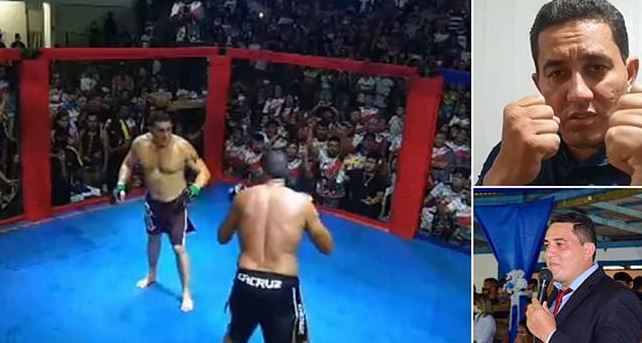 Simão Peixoto and Erineu da Silva during the match

Two politicians who are at loggerheads have decided to squash their beef by fighting in a boxing ring.

Simão Peixoto, the Mayor of Borba, was publicly challenged to the fistfight in September by a former councillor named Erineu da Silva.

Silva, who uses the nickname Mirico, was reportedly furious at the mayor’s alleged failure to conserve a waterpark near the Madeira river and demanded a showdown with Peixoto.

The Borba mayor later softened his tone after some voters suggested that his conduct was unbecoming of an elected official.

Peixoto assured citizens he would only take part in an organised altercation inside a ring.

“I’m not a street fighter…” he said on his official Facebook page in a video released early November. “I’m the mayor of the municipality of Borba.”

“[But] if he really wants to fight… we’re ready to fight… I’ve always been a winner.”

The fight eventually took place in the early hours of Sunday, Dec. 12, with hundreds of people paying to watch.

Peixoto entered the ring at around 2.30am, surrounded by aides and carrying a black towel with the name “Jesus” stamped on it.

The mayor appeared in an aggressive mood, stamping on the platform and squaring up to his rival.

The fight lasted for 13 minutes. Peixoto’s team live-streamed it.

In the opening seconds, the mayor, 39, briefly knocked Silva to the ground.

After three shambolic rounds for the challenger, “the mayor of Borba was almost unable to walk because of the number of low kicks he received from his adversary,” reported BNC Amazonas.

“The mayor took such a beating his jaw dropped,” another regional website, Fato Amazônico, reported.

However, Peixoto emerged victorious after three rounds in what has been termed “the brawl of Borba”.

Spectators reportedly shouted, disgusted with the result after the Mayor was declared winner.