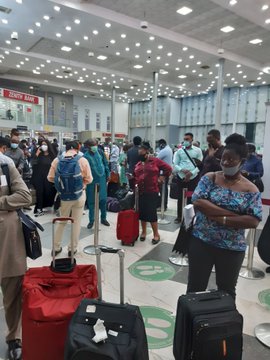 In a quick reversal of decision, the UK authorities Tuesday reviewed the travel ban imposed on Nigeria and 10 other countries over the Omicron COVID variant.

This is coming as indications emerged that the variant was already being transmitted widely within the UK.

The federal government had threatened a tit-for-tat approach if the UK and other countries placing ban on Nigeria did not rescind their decision.

The decision, according to Minister of Aviation Hadi Sirika, was to be announced Monday or Tuesday.

Announcing the lift on travel ban while addressing the British Parliament in London, UK Health Secretary Sajid Javid told the lawmakers that England would remove all 11 countries from red list from 04:00 GMT Wednesday.

He said the travel red list for countries was no longer working in stopping the spread of new variant.

“So I can announce today that whilst we’ll maintain our temporary testing measures for international travel, we will be removing all 11 countries from the travel red list effective from 4am tomorrow,” Javid said.

Similarly, Transport Secretary Grant Shapps also wrote to announce on his Twitter handle that lifting of the ban would take effect Wednesday.

“From 4am on Weds 15 Dec, ALL 11 countries will be removed from England’s travel red. All current TESTING measures remain in place & will be reviewed in the first week of January,” he tweeted.

“As always, we keep all our travel measures under review and we may impose new restrictions should there be a need to do so to protect public health,” Shapps further wrote.

The development followed the federal government’s restrictions on Emirates Airlines, the flag carrier of UAE.

Among others, the UAE authorities announced that all foreign airlines with Nigerians on board would not be allowed into the country.

This was after UAE authorities had refused Air Peace the three slots requested by the Nigeria airline in Sharjah Airport.

Director-General Nigerian Civil Aviation Authority (NCAA) Captain Musa Nuhu, had, announced the withdrawal of the winter schedule comprising 21 frequencies with 14 in Lagos and seven in Abuja it  approved for Emirates.

The NCAA approved a weekly flight to Abuja for the UAE Airline.

However, instead of accepting the condition, the airline temporarily halted its operations, even as it assured its customers that the issue would be resolved soonest.

And few hours after the Nigeria government’s decision, the aviation sector in Dubai wrote to convey its decision to reverse the ban.

The decision was contained in a letter dated December 13 and signed by Director-General of the DCAA, Mohammed A. Ahli.

“The Dubai Civil Aviation Authority presents the compliments to the Honourable Management of Air Peace Nigeria.

“We write in reference to Air Peace’s possible/intended operations to/from Dubai Airports (DXB), we have received information from Dubai Authority, with regard to slot availability at DXB – Terminal 1 and as a gesture of goodwill and a support of UAE and Nigeria relations, I case Air Peace wish to start flights, slots have been blocked by Dubai Airports as detailed below.

“Slots available and blocked for Air Peace are the following: All days.

“As these slots cannot be blocked indefinitely, we would highly appreciate if Air Peace could kindly reach out to Dubai Airports and inform them of their intentions to operate by Thursday 16th December 2021 and accordingly confirm the blocked slots.

“Dubai Airports have also confirmed that dnata-the ground handling agents at DXB have sent the ground handling quotation to Ms. Reham Mustafa- Country Manager and also, Emirates flight catering is working on the quotation and should send it out latest by tomorrow morning.

“For landing permission, they could contact our Air Transport section as detailed below.

“We look forward for Air Peace to operate with utmost confidence to/from DXB at the soonest.

“Dubai Civil Aviation Authority avails itself the opportunity to renew to the Honourable management of Air Peace the assurances of its highest consideration and reiterates its support at all times,” the letter reads.